Sora (ソラ) is the main protagonist of the Disney/Square Enix video game franchise Kingdom Hearts and its related media.

At the start of Kingdom Hearts (2002), Sora and his friends Riku and Kairi are building a raft to sail away from their home on the Destiny Islands to explore the worlds beyond their tropical paradise. When their home is consumed by darkness, Sora comes into possession of a mystical weapon known as the Keyblade and lands in a world called Traverse Town, a place where refugees have gathered following the destruction of their worlds.

While there, he meets Donald Duck and Goofy, along with an assortment of Final Fantasy characters including Cid, Leon, Yuffie, and Aerith, who explain to the trio more about the origins and history of the Heartless threat. Sora sets off with Donald and Goofy in search of his friends and the missing King Mickey.

In Kingdom Hearts: Chain of Memories (2004), Sora, Donald, and Goofy come upon a mysterious fortress known as Castle Oblivion in their search for a way to bring Riku and Mickey home

In Kingdom Hearts II (2005), The trio awaken from a year long coma and after a brief reunion with Mickey, continue their search for Riku.

In Kingdom Hearts 3D: Dream Drop Distance (2012), Sora and Riku are summoned to the tower of retired Keyblade Master Yen Sid to take the Mark of Mastery exam and formally earn the title of Keyblade Master. Sora is led off the path by Young Xehanort as part of a plan to turn Sora into the final vessel of Master Xehanort’s heart. Sora falls into a coma as a result of this scheme before being eventually awoken by Riku.

In Kingdom Hearts III (2019), Sora returns from saying goodbye to his Dream Eaters at the end of Dream Drop Distance and is sent out on a quest to unlock the Power of Waking and recover the strength he lost at the conclusion of the exam.

Following the final defeat of Master Xehanort at the end of Kingdom Hearts III, Sora disappears after abusing the Power of Waking to restore Kairi when Xehanort shattered her.

Sora has made multiple appearances in the GameFAQs community's best video game character contests, though he hasn't approached Clinkeroth or Noble Nine levels of popularity.[1]

In a 2010 Famitsu poll, respondents voted Sora fifth among their favorite video game character of all time.[2] In another Famitsu poll from 2011, Sora was voted as the most popular Kingdom Hearts character, with his fight against Roxas in Kingdom Hearts II ranking as the best scene from the series.[3] He also placed 15th in a 2010 Game Informer poll of best characters from the 2000s.[4] In a 2010 ASCII Media Works poll in which fans voted selected whose video game or manga character would like to name their children after, Sora's name ranked second in the male category.[5] According to a 2017 Famitsu Weekly feature covering Kingdom Hearts' fifteenth anniversary, Sora ranked first in a popularity poll of ten male characters, with 284 votes.[6][7]

Among gaming fans, Sora has been a popular nominee for joining the Super Smash Bros. roster. According to a September 2019 analysis of Twitter by Reddit user zelcf, Sora was the top most-wanted character in the U.S. and Europe, and the second-most wanted character in Japan.[8] In a Feburary 2020 poll run by Inside-Games, Sora was the most requested character among Japanese Smash fans.[9] Source Gaming’s March 2020 poll considered responses from 4,327 players, who were asked to give an unordered list of six characters they wanted to see in Smash, and ultimately submitted the names of 1,423 unique characters; Sora placed sixth.[10]

As of 23 June 2021, out of all the characters originating from the Kingdom Hearts series, Sora has been tagged in the greatest number of fan works on Archive of Our Own (AO3).

Some people find Sora too sweet and positive, and therefore prefer "serious" or "edgy" characters like Riku, Axel, and Roxas. 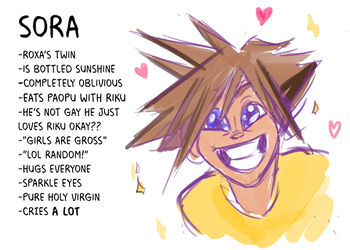 KH FANFIC STEREOTYPES by alltheickyjobs (circa May 2016)

A "Sorta" is a character that is sorta Sora. The Sortas include Roxas (Sora's Nobody), Xion (a being shaped by Sora's memories, even taking on Sora's physical appearance near the end of 358/2 Days), Ventus (Sora's heart tenant, who is identical to Sora in appearance), Vanitas (who is almost identical to Sora, except in coloring), and Data Sora. In fanon, Sortas often have sibling-like relationships with Sora, and may appear as his siblings, cousins, or other relatives in AUs.

Soranort - A subset of angst/darkfic that became popular after 3D. The normally bubbly and friendly Sora succumbs to Xehanort's dark influence, often revealing that he's been hiding deep psychological pain caused by the stresses of his adventures.

On (AO3), some tags associated with Sora include fluff, angst, romance, hurt/comfort, and friendship.[11]

As the main protagonist of the series, Sora is naturally popular in both het and slash shipping within the fandom. Since they were established as childhood friends in the first game, the most popular ships are those which pair Sora with Riku, Kairi, or both. Shipping Sora with a Sorta has often been considered a form of incest.