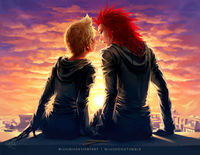 Axel and Roxas on the Twilight Town Clocktower, art by nijuuni
AkuRoku is a popular ship between Axel (also known as Lea) and Roxas from the Kingdom Hearts series.

As of 2010, AkuRoku was the most popular Kingdom Hearts ship on FanFiction.Net[1]; however, as of 2020, it is only the second most popular KH ship posted on Ao3, following SoRiku.

AkuRoku had many young fans in its early days who were close to Roxas’s age of 15, and thought Axel was an attractive match for him.

Axel's original self, Lea, appears as a minor character in Kingdom Hearts: Birth by Sleep (2010), in which he is close to Ventus' age (around sixteen years old) and visibly much younger than Axel; the events of this game took place roughly a decade before Axel and Roxas met. Many fans have supposed[2] that this technically[note 1][3] places Axel's age in his mid-twenties, and consequently question whether it is appropriate to ship him with someone of Roxas’ age.

Some AkuRoku fans who took issue with the possible age problem, or who had been swayed by others, chose to instead switch their OTP to AkuSai, as Saïx’s relationship with Axel became increasingly important as the Kingdom Hearts series progressed.

Some have pointed to anti-shippers as responsible for perpetuating negativity against AkuRoku circa the release of Kingdom Hearts III (2019), and perhaps additionally for the ship's general decline in prominence.[4]

The release of Kingdom Hearts 1.5 Remix (2013) included a cinematic version of Kingdom Hearts: 358/2 Days (2009) with additional FMVs. Among these was a tearful goodbye between Axel and Roxas. In the original Japanese version of this scene, Axel told Roxas, “See ya, partner.”[5] In the English translation, Axel instead says “Back atcha', buddy.”[6]

A popular AkuRoku fan artist, nijuukoo, made a Tumblr post explaining her frustration with the changes made in the translation, which made many other fans aware of the discrepancy.

The main issue fans had with the change was that it supposedly downplayed the importance of Axel and Roxas' relationship. Many assumed it was an intentional attempt to make the scene less romantic.[7] Others argued that no translation is perfect and the difference was minor. 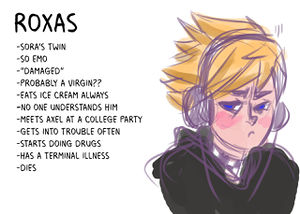 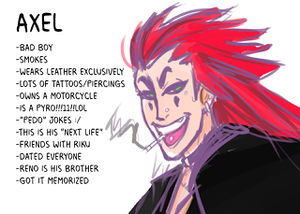 AkuRoku fan works have been associated with certain conventions. They may feature common yaoi tropes such as seme/uke stereotypes and the Height Rule.