That year they had 92 attending members and 34 supporting members. Attending membership was $15 plus three SASE. There was a "dealer's room, art show, auction, costume party, panels, videotapes and more!" [1]

The Guest of Honors were Connie Faddis and Teri White.

The con skit was "Graven Mirages," a parody of the zine Graven Images.

The convention raised $475 for charity. 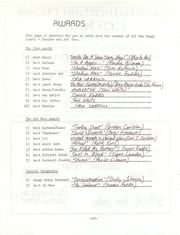 from the program book, the winners! Huggy Awards

There had been only a handful of vids created in 1980 (see Behind Blue Eyes, All the Time, The Boy Can't Help It, and Beep Beep. By the second Zebra Con, this was changing. From Morgan Dawn's notes:

"They made 20 songs videos by Z-Con 2, in the Fall of 1980. They carefully put the gen on one tape and the 'underground' slash on a different tape. The night before the con, Diana decided that they needed more credits. By now, they had found out that if one picture was paused, then the action scene they edited after it looked okay. Diana and Kendra spent the con inviting people into their room to share their *crack* i.e. vids. They blew everyone away - no one had seen anything like that. They spent the whole con showing their work over and over, and explaining how they did it. [2]

"I see in the Z-con artshow awards that Lori C-C did a stained glass tomato. Our minds must run in the same gutter - I got as far as a full-scale design for one, but didn' t have time to make it for the con."[3]

Jan's topic from the Z-Con writer's workshop--how come so many people write DMS as a saint and KH as a neurotic mess. Depends what your timing is, mainly, I think, since fourth season Hutch (who?) was getting very screwed-up about a lot of things. I've never personally seen DMS as a saint, though. I always reckoned saints would be blue murder to live with. Why do you think so many of them were martyred? Neither do I subscribe to the Dirtball theory. If you go along with the idea that a man's car is an extension of his personality--who's the Dirtball then? Just a thought."[4]

Karen and Paulie: Bless you! Z-Con was like a big family reunion. I had a fantastic time and you even accomplished a small miracle. I spent three whole days not worrying about the store. I think that's what got me through the winter. November 13-15, huh? Sign me up for next year. I'll be there.[5]