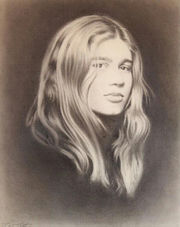 Zac portait by Cytheran (2009).
Zac Hanson (born 1985) is a musician from Tulsa, Oklahoma, best known as the youngest member of the band Hanson. He is the third oldest of the seven Hanson children. In the last few years, Zac has sung lead on many more of the band's songs.

And as for young Zachary? The boy has grown up before our very eyes, from a child to a young man who occasionally wears jeans tight enough to give us shivers. Built like a cuddly brick wall, his jonny would be a perfect in every way a girl could ask for in a memorable moment. Dare I say, a mouthful to melt in your hands?[1]

In the early years, Zac was most likely to feature in stories only as comic relief, as he was a little too young for most romantic plots. In recent years, as his popularity has grown, he has become the primary romantic interest in many stories.

Drawing of Zac and Taylor by Flor

Semi-popular, mostly because both are drummers.

A fellow musician who Hanson have toured, recorded and written with. Most fic for this pairing (aside from stories where it only appears in the background) is written by a handful of authors, and the most popular one to feature it is Truth Is a Whisper (Hanson story) by Bethany and Amber.

Abbreviated as Zatalie, this pairing features Zac and Taylor's wife. Popular amongst Hanson roleplayers, a few popular fics featuring this pairing have been written in recent years, including Bizarre Love Triangle by Calla and Diamond, Nine Crimes by Elizabeth and Troubled Hearted Kind by Bethany. It also appears in Mistakes We Knew We Were Making by Calla, although the story is much more about Zac/Taylor.

Abbreviated as Zike. A small, rarely used LiveJournal community for this pairing, zacnike, exists. Because of their age difference, especially in the early years, this pairing is less popular.

Abbreviated as Zaylor, the most popular incestuous Hanson pairing of all. Made popular by Akimbie's On My Own and Kerry's Lost Without Each Other Trilogy.