From Fanlore
(Redirected from White washing)
Jump to: navigation, search

Whitewashing refers to characters being portrayed with a lighter skin tone and/or or being made to appear more white, either physically or culturally. For instance, an anime character's name being changed to sound more "American" in the dub is whitewashing. Whitewashing can occur in canon reboots/adaptations or in fanworks (and the former can often influence the latter). It can be caused by colorism, racism, casteism, classism or other reasons.

In particular, perceived whitewashing by fanartists who depict a character's skin as paler than it appears in canon is a hotly-debated issue, with many fans (especially fans of colour) pushing back against this erasure of a character's ethnicity, while others claim they are being oversensitive or discouraging artists from depicting characters of colour altogether.

Due to ambiguities in the source text, people may disagree on whether a character portrayal does or does not constitute whitewashing. 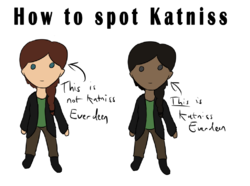 How to Spot Katniss Everdeen, a piece of fanart contrasting Katniss' whitewashed appearance from The Hunger Games films with her true-to-book appearance. (Art by magiceve)