There was a Star Trek proposed zine with this title.

Turnabout is a gen personalzine by Sharon Ferraro. It contains much Star Trek: TOS as well as other material.

Turnabout 1 has April 1976 but is copyrighted inside with the date of March 1976. The zine contains 9 pages. The front cover is by Phil Foglio, and the interior photos are by Gordon Carleton, V.M. Wyman, and Mark Wright. 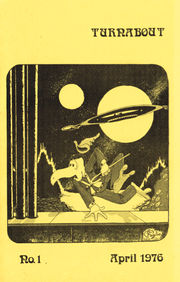 front cover of the first issue is by Phil Foglio and is titled "Was It Something I Said?" The character is the Trader and was a semi-regular from Phil's "Cast of Many." The back cover includes a small illo in the center and Sharon Ferraro's name and home address 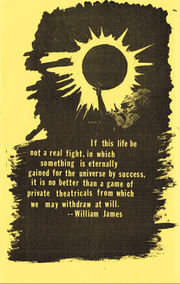 inside back cover of issue #1 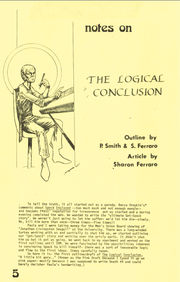 an interior page from issue #1

From Ferraro: "This first issue of my ego-trip is sincerely dedicated to PAULA SMITH, for putting up with me."

Oust when I thought I had too much to do -- Menagerie, the gofer squads, boojums Press in general, finishing school and working-- this idea squirms its way into my head., and tickles my ego. I had just finished the 3rd printing of the STW Zine info booklet (25¢ & 2 stamps) and realized how much I dug the format. By the time I had finished collating, stapling and folding them, I had this idea on my hands. A personalzine. Of my very own. To print anything I want. As irregularly as I feel like it. Something to solicit non-Trek art for, to rant about Ellison & Tiptree in, to be candid about cons in, to review zines and books in, to share ideas in and share experiences in - and to print ART in!! And even use the Richard E. Geis/Jeff Johnston "Quotes-to-fill-the-space" gimmick in.

Of course, it will not change the stream of fandom or impress the hell out of everyone, but it will be interesting and will give me a completely uncensored podium. Buck Coulson says that fanzines are the only completely free speech forum left. No one can tell a fanzine editor what they can or can not print- and maybe that's part of the magnetism. And that is what TURNABOUT is.

The name comes (because I knew some people would ask) from one of my very favorite sayings- since I could read- "Turnabout is fair play." I think it was in fairy tale books I first came across it, but it sure stuck.

There will be no subscriptions available to TURNABOUT (or TA). When you get one issue and are bewildered enough to want another- send 25¢ and 2 stamps. When it comes out, I'll send it. OK? Damned straight. Art submissions are greedily solicited- must be black and white with no grey tones. (Because that means we have to have a metal plate made and that costs more, but then again if it is that fantastic it might he worth it. Right Doug?) The first issue of TA will be a giveaway at SeKWesterCon - all attending and supporting members will receive it.

[zine]: The first issue of the unique zine is one of the first real personalzines to hit STrekdom. Sharon describes this as her zine to do with what she will and print anything which suits her. Inside #1 is a section on 'Adventures Abroad' which mildly interesting but definitely not SF or ST. There's a commentary on Space: 1999 and the most interesting thing is the notes on The Logical Conclusion concerning the outline and original development of the story. This is an interesting zine, but I can't promise it will appeal to everyone or that STrekdom is really ready for a real personalzine yet. Sharon even says it won't always be even ST or SF oriented. Give it a try however if you think somewhere in your mind that it might pique your interest. [1]

Turnabout 2 was published in 1976 and contains 12 pages. It has a front cover by V.M. Wyman, a back cover by E. Pearse, interior illos by Gordon Carleton, Sharon Ferraro, and D. Rice.

[Child of the Universe]:

The Historical Origins of Mary Sue: Just FYI ---for those who are interested. This appeared on an MFU list, posted by Carol Lynn who was there. The term originated almost 30 years ago, when media fandom was entirely print based. Of course, media fandom came from Trek fandom which came from SF fandom.

"As one of the few still living persons who actually read the Star Trek story that inspired Sharon Ferraro to call the genre "Mary Sue," I will point out that in the original her [Mary Sue] name was Svetlana. She was the Premier Captain, Premier Science Officer *and* Premier Medical Officer of the Starship Enterprise. She was 15 years old. *Everyone* loved her because she was so sweet and beautiful and sensible; Kirk, Spock and McCoy felt privileged to serve under her. And when she was killed by the Klingon Death Ray she willed herself back to life.

Sharon published a part of the story in her personal 'zine "Turnabout". She [Svetlana] is Chekov's "co-efficient," and also First Officer, Chief Medical Officer, Chief of Engineering and Commander of the Enterprise. During her orientation walk-around of the ship, she fixed a malfunction in the warp engines, at least one other piece of equipment in Engineering, goes to medical and fixes a bloodclot in a crewman's brain by applying pressure to the back of his head. Walks onto the bridge and while standing next to Kirk gives a course change.

The story then picks up in the briefing room where Svetlana has told her story about being kidnapped by aliens and experimented on while asleep, so while it killed everyone else, it wasn't so much of a trauma for her. She escaped and piloted her father's starship back into Federation space."

Carol also offered bits of dialog which I won't reproduce her.

I believe afterward, Paula Smith popularized the term "Mary Sue and, as they say, the rest is history. [2]