You may be looking for the 1990s Star Trek zine series, Federation Chronicles.

The Federation Chronicle is a gen Star Trek: TOS club zine, published by a Houston, Texas Star Trek club called Final Frontier. It is an anthology of fiction, art and non-fiction. There are four issues.

Hal Wilson, the editor, was 12 years old when he began this zine series. The audience for this zine and its club were boys aged 10-15.

Federation Chronicle 1 was published in July 1972 and contains 28 pages.

The front cover is by Russell Young, and interior illos are by Cheree Townsend. Some of the art by Townsend was reprinted in some issues of A Piece of the Action. 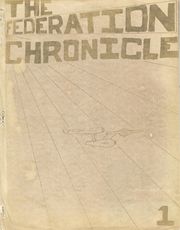 [Journey to Malakesh]: If this story doesn't quite match the quality of my others, it's because this was one of the first ST stories I ever wrote, way back in 1972. So, be forgiving when you read it. :) Originally printed in the fanzine "Federation Chronicles #1", 1972. [1]

[zine]: The zine is very good! Shorter than some, but certainly not inferior. I kid you not. I dare say it's as good as T-Negative! I'm telling you the truth as see it. [2]

[zine]: They're really good, just a tad rough, but that's to be expected the first time around.

I think you were a bit rough on your zines. They weren't a Negative or Babel, but they weren't bad for a first try.

And remember, we learn a lot from our mistakes, as from our successes. ...many a rocket crumpled on the pad before man set foot on the moon. [3]

[zine]: Yes, it is a creditable achievement and one you have a right to be proud of. [4]

[zine]: I found that issue 1 was not a bad issue at all for a first attempt. Wish my first try at a ST fanzine looked as good as yours. [5] 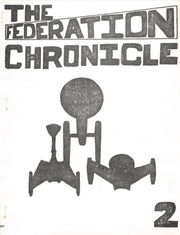 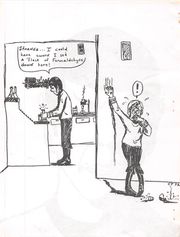 back cover of issue #2, Cheree Townsend

The Federation Chronicle 2 was published in December 1972 and contains 30 pages.

The interior illos are by Cheryl Townsend. The front cover is by Delvon.

This zine is a publication of the Final Frontier ST Club, but it is also available to non-members. #3 and #4 are scheduled for March and May, respectively... After admiring the ST Trivia Test and glancing through the rest of the zine, I turned to the editor's page and found, to my great surprise, that he and the other charter members of the FFSTC are seventh graders. They've put out a nice-looking zine by anyone's standards. And although this is a short issue and the contents vary in quality from excellent to fair, the overall tone is dignified (not stuffy, but not giggly either). The contents include the above-mentioned (and excellent) trivia test, a 'mail interview' with the omnipresent Jacqueline Lichtenberg, and a humorous Christmas-on-the-Enterprise story. [6]

The Federation Chronicle 3 was published in May 1973 and contains 55 pages.

The editor mentions he is 13 years old and just finished the 8th grade. 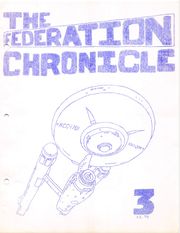 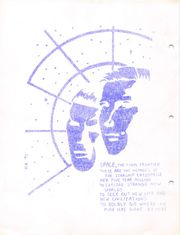 back cover of issue #3, Parker Riggs 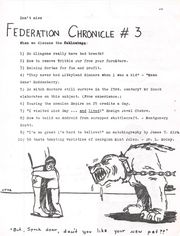 teaser for issue #3, printed in issue #2

I have tried to put as much variety in this issue as possible. I want everyone to enjoy it. Serious stories, humorous stories, puzzles, show adaptations, and poetry is quite a variety.

A little bit about the Final Frontier Star Trek Club: We have 35 in-town members and 20 out-of-town members. Our club has grown from a tiny menace to a nationally known organization. I am just now getting to the point of which I am better organized. The membership cards will be coming in soon. I promise -- you'll love them. They are a beautiful wallet-size photo of Kirk, Spock, and McCoy in the transporter room.

I wish to point out that to publish a zine like this would be impossible without help. At this time, I wish to thank all of the contributors; especially Cheree Townsend. Without her help, we would not have the zine we do. Her excellent stories and superb art work have just done wonders for the quality of this zine. Thank you, Cheree.

A big thanks to Helen Young for her long hours spent typing and helping out.

The Federation Chronicle 4 was published in March 1975 and contains 30 pages.

This issue was the last one, and the fan club was disbanded as well. 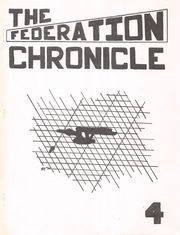 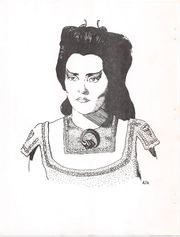 The interior art is by Sue Pemeroy, James Harold, and Warren McCall.

The editor apologizes for the lateness of this issue, two years after the previous one. He cites school and other activities as things taking up his time. However, "to a Trekker, that is far from adequate to use as an excuse for not printing last summer."