Subject: Adventure is a gen anthology of fiction and art. This zine is intertwined somehow with the zines Subject: Airwolf and Subject: Adderly.

"This is a new mixed-media, illustrated zine by a very talented group of writers, all who have been professionally published in newspapers and magazines (one has written for 'Cosmopolitan' and another has had a book published.)" - from Pop Stand Express #10 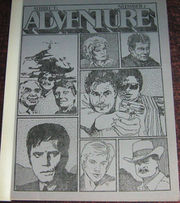 There was a story in "Subject: Adventure #1" about AJ being lost at sea, and in the midst of his grief, Rick had a dream in which AJ was trapped, and when he awoke, he heard AJ whisper from the shadows, "I need you." He knew then AJ was alive, no question. He had to convince Town, who was aware of their uncanny rapport. If anybody's interested. "S:A" also has an excellent story from Cecilia's p.o.v. and stories on Miami Vice, TJ Hooker, Airwolf, Hawaii 5-0. If you like these other show's, it's worth it. If you're only interested in the S&S stories, it's still worth it! [1]

The zine contains 157 pages - the hand numbering of each issue adding to the illusion that you have received a valuable item. J.M. Bolton Is credited with the cover design, which I found worthy of a professional publication. My only problem with the cover was that I could not establish the identity of the woman character. Cecelia Simon, perhaps? We are asked a question in each of the stories. Unfortunately, the readers are not provided with enough substance to adequately answer. QUID PRO QUO by Jackie Wetnrich, is a T.J. Hooker adventure that certainly has the feel of of the show. Once more Hooker has chased a faceless crook Into another dark alley. You are able to feel the danger, taste the fear of approaching death as he waits helpless in the shadows. Suddenly, an Indiana Jones clone from Hooker's past steps Into the story to rescue him, and to take the readers Into confusion. No strong argument is made to support Hooker's change in attitude from a well known supporter of law and order to a cop willing to lie, not only to fellow cops, but also to Corrigan, a close friend. I was left with the feeling of things unsaid, facts not revealed. RULES OF HONOR by Marjory Thierry began with an excerpt from the "Alrwolf Writer's Bible" explaining Archangel's sense of honor. The story itself follows a classic pattern of Master Spy vs. Master Spy. Archangel and Hawke travel to an anonymous Central American country to find the "important" Information left behind by a dead fellow agent. We are even provided with hurt/comfort when the flu hinted at on page one overtakes Hawke in one of the many small adobe huts that form the back ground of this story. Archangel rescues Hawke and Hawke & Co. rescues Archangel, etc., etc. Mr. Thierry states the objective of this story is the testing of the relationship between Archangel and Hawke. Since the author has placed the two characters In separate countries for the bulk of the story, we are left with the question of just what this test could have been, not so much tested here as his stubborn streak. Archangel's sense of humor Is NO LUCK WITH THE LADIES by Richard Thierry Is the Miami Vice entry. Nameless, personality-altering drugs are used to change Sonny Crockett into his cover persona. Sonny Burnett. An interesting concept not fully explored. Crockett and Tubbs characters are presented as only cliches, and the villains are predictably evil. Tubbs does attempt a rescue of sorts In the end, but I feel most readers will be left with one nagging question: "What happened to Elvis?" The two Simon and Simon stories, IT'S THE WAITING THAT MAKES YOU CRAZY by Joan Bass, and A QUICK JOB FOR A MESSENGER by Amanda Block, would get my vote for best overall and most professional writing. Even if you are unfamiliar with the series, the grief Cecelia Simon experiences while waiting in Joan Bass' story for her to sons to recover from yet another misadventure. Is very real. From the moment we enter her kitchen while she prepares for the bridge club - you're home standing behind your Mom ready to steal a tiny sandwich from the tray and make good your escape. When Lt. Downtown Brown delivers the news of the accident, you run to get your sweater and bag so you can go along Just In case. Joan Bass has brought to life a woman coping, but unsure she can really do what Is necessary. As hundreds of women In the past, Cecelia Simon calls upon her core of steel and survives. Mrs. Simon proved herself more than a little lady In an organdy apron. Amanda Blcok's A QUICK JOB FOR THE MESSENGER packs the most adventure of this zine within the limits of San Diego. A.J. is presumed dead from drowning; victim of a mysterious boating accident. Unlike other partners. Rick does not waste time wringing his hands in distress. He follows his intuition and we eagerly follow his leads through the maze of contradictions to a rewarding finish. The Simon and Simon stories represent the best of this new publication. Is your fandom, you will be very pleased. [2] 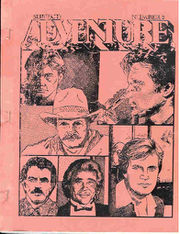 Subject: Adventure 3 was published in 1988 and contains 96 pages. 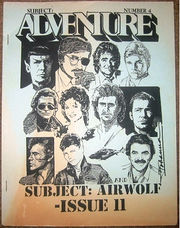 Subject: Adventure 4 was published in 1990 and contains 86 pages.

Though the cover it says it is the second Airwolf issue, there is other content.