From Fanlore
(Redirected from Senticon)
Jump to: navigation, search

SentiCon was a fan-run slash convention first held in 1998 in Grand Rapids, Michigan.[1] It began as a convention "solely devoted to The Sentinel but -- like ZebraCon, which began as a Starsky & Hutch con and later shifted to embrace all fandoms -- after 2002 SentiCon evolved into a multi-fandom slash con." [2] It also began as a gen and slash convention, but formally declared itself as a slash convention in 2001 due to a lack of gen attendees. [3]

Every year, the convention would have a different theme. SentiCon 5 was known as "The Sleep-Over" and attendees were encouraged to come to the Saturday Night Festivities dressed in wacky pajamas and slippers. In 2006, the final year that the convention was held, the theme was "Pirates," in honor of the upcoming release of Pirates of the Caribbean 2: Dead Man's Chest.[4]

The convention had a fanzine dealer's room, fan-run panels[5], an art show for fannish art[6] and a writing contest[7]. It also announced the winners of the Cascade Awards - awards given to fan writers and artists every year in recognition of their contributions.

This was an "adults only" slash con, and no one under the age of 18 was admitted.

The convention hosted a writing contest. Rules from the 2004 contest are available at this archive of the Contests and Games page.

Every year, cartoonist Peej renders a logo that is used for the SentiCon badges and T-shirts. This tradition started in 2000 with SentiCon 2 and featured Jim and Blair of The Sentinel surrounded by provisions in preparation for the whole "Y2K" chaos that never happened.

The following year, SentiCon 3-D, she paid tribute to those old B-movies and drew a giant alligator (which appeared in an episode of The Sentinel) attacking the city of Cascade a la Godzilla, with Jim and Blair on the run.

SentiCon 4 saw a change in the art as we opened the con to welcome more fandoms: Jim and Blair (who will always appear in the logo to honor the fandom that started this con) were joined by characters from Due South, SG-1, and The Invisible Man in a kind of "summer camp" theme.

In 2003, Peej took on a greater challenge by incorporating several of the current most popular fandoms. SentiCon 5: The Sleepover featured the guys from Due South, SG-1, and I-Man, Clark and Lex from Smallville, Starsky and Hutch, Illya and Napoleon from The Man from U.N.C.L.E., and the four hobbits from The Lord of the Rings trilogy in addition to Jim and Blair. All characters were drawn dressed in pajamas and ready for a big slumber party.

For SentiCon 6, Peej promises to depict all the characters dressed up as a pirate crew. Who she'll include in the piece is a mystery at this point, but we're sure it'll be as fun as the logos from SentiCons past, and make for a great T-shirt that our members will be pleased to wear![8]

SentiCon 2 was held at the Lexington Hotel Suites in Grand Rapids, Michigan.

A non-guest fancon for The Sentinel. A weekend of fun, friends, art, and fanzines held in Cascade Michigan. Membership limited to 120 attending members. Our first year was a total blast! Come have fun with us once again as we share our fandom for Jim Ellison and his partner Blair Sandburg. Programming, games, prizes, art show, Video room, Blooper s, and more. Everyone is welcomed! Dealers selling every thing from fanzines to aroma therapy! Home of THE CASCADE AWARDS for fannish excellence in this genre.

AGENT WITH STYLE: Fanzines from many editors, in many fandoms, The Sentinel included.

KAREN RIVER: Art prints from many fandoms, including The Sentinel.

BLACK FLY PRESS: Nightowl and company bring you zines and goodies focused on The Sentinel

This year SentiCon embraces three other fandoms in addition to our ongoing host fandom THE SENTINEL. Come by the site and see the fun we have in store for attendees in 2002.

Past years have been very successful in sending people home feeling like they had a great time. This year will be no exception. In addition to entertaining Sentinel slash fans, we also welcome Due South, Stargate SG-1, and The Invisible Man. Three other shows with wonderful potential.

We're at a new hotel this year, The Radisson East, which has been renovated from a Holiday Inn Holodome. A magnificent pool and patio area awaits our members.

This year offers two meeting rooms, an art show, a huge dealer's room and two banks of hall dealers (smoking and non). This year also offers a Sunday Breakfast buffet to send our fun-wearied travelers off in style.

A much bigger and nicer hotel than the last, the Radisson offers room service, a restaurant and bar. All activities are on the main floor. It backs Woodland Mall and sits amidst a plethora of eateries and shopping.

Come by the site and take a look! We'd love to have you attend! This hotel can accommodate our convention for years to come. And membership cutoff has raised to 200. 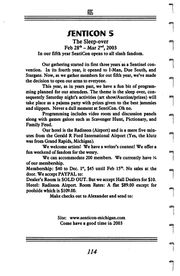 flyer for Senticon 5 (2003), click to read, found in the back of Three of Hearts

SentiCon 5 was known as "The Sleep-Over" and attendees were encouraged to come to the Saturday Night Festivities dressed in wacky pajamas and slippers.

Overall, Senticon gets a fairly high rating from me, but it's not something I'd go to without knowing at least a couple of people in advance. The panels and shopping were good, there was no feeling of "I'm missing something" because the panels don't overlap, the vid room had a good selection, yadda yadda... but it was the company that *really* made the weekend a blast for me. [12]

We have indeed decided on the Pirate theme for SentiCon 6. The con's official title is SentiCon 6: Slash Con of the Caribbean.

What does this mean? Well, it means you get to dress up and talk like a pirate for the course of the weekend! It means a hunt for pirate treasure, a pirate-themed writing contest, and lots of other fun stuff to help you swash and buckle (or swish and unbuckle).

If you have any suggestions, comments, or questions, PLEASE feel free to throw 'em out here. If you'd like more information about SentiCon, please write to:

SentiCon is a multi-media SLASH convention taking place annually the first weekend of March in Grand Rapids, Michigan. All fandoms are welcomed! [13]

Sample activities from the 2004 convention can be found on this schedule page here, Archived version.

In 2006, the final year that the convention was held, the theme was "Pirates," in honor of the upcoming release of Pirates of the Caribbean 2: Dead Man's Chest.

The theme of the con this year was Slash Con of the Caribbean and we all had a blast with it. Folks were dressed in pirate gear - everything from a simple bandana on their head to hats and eye patches to full out Jack Sparrow and Will Turner costumes....There were pirate-themed games that were played as well, as each "ship" tried to win as much booty as they could before the end of the con....Another contest/game that was played was "create a flag". Each ship was given a piece of white posterboard and told to make a flag...There was also a dealer's room and a charity auction, plus a video room. And panels, of course. Me and Charity moderated a Supernatural panel that went over really well, and then we showed two episodes in the video room that was well attended, too. [14]