Prophets in the Wilderness 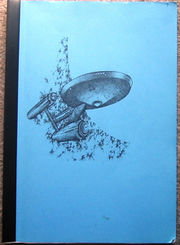 front cover, appears to be the same as the cover for Astray in the Wilderness

Prophets in the Wilderness is a K/S slash Star Trek: TOS 143-page anthology. It contains a dozen stories.

Way back in 1982, two fen looked up from the zines they were reading, looked at each other and said, 'Hey, we can do this too!' And they did. They had the stories - two each! They had the technology - an elderly electric stencil printer (100 copies per minute) that went berserk when you took your eye off it. Most of all they had the enthusiasm. And so they wrote a zine. They called it THE VOICE 1 and they sold it. So they wrote some more. Kate came and they kept writing. Frances came and ... Finally after 5 issues, they said, "This is fun let's ask more people." The VOICE wasn't big enough so along came IN THE WILDERNESS (ITW for short) - all 7 of them. [1]

Contents: (some summaries are by Gilda F.)

See reactions and reviews for Finding the Way.

See reactions and reviews for Benefit of Clergy.

See reactions and reviews for This Cool North Wind.

See reactions and reviews for Safe.

See reactions and reviews for Triptych.

See reactions and reviews for Silk.

See reactions and reviews for Falls the Shadow.

See reactions and reviews for For a Few Quatloos More.

[zine]: The presentation is crisp and clean, with the "In the Wilderness" trademark illo of the Enterprise. The only other illo in the zine is of Akhenaten, King of Upper and Lower Egypt etc., which is intriguing...

THIS COOL NORTH WIND by Sarne (Sarne writes a mystery in a vivid evocation of ancient Egypt. Clearly, the author has knowledge of Egyptology. She draws a parallel between Spock's own mystique and the ancient Egyptian king to explore Spock's feelings about the choice he has made to bond with Kirk. Spock is drawn back into antiquity and Kirk after him, until Spock again makes his choice for Kirk. The plot is handled delicately and the descriptions of place are delightful. I can find nothing to argue with in the characterizations. This is cool and skilful writing.)

DOUBTFUL DIVERSIONS by Anne Elliot (A light-hearted look at a male insecurity: size.)

FACING FACTS by Anne Elliot (Kirk is so fed up with Spock always acquiescing to his every demand, he engineers a series of dangerous and exhausting challenges for them both on shore leave in the hope Spock will rebel. This relationship worries me because Spock seems so insecure and emotionally dependent. Why would Kirk want a lover who gives in to him all the time? Interestingly, Anne does explore Kirk's worries about losing his own control in love, and his ambivalence about Spock's physical strength. I find this Spock rather colourless.)

KIRK'S KAHS-WAN by Kate Daniels (This one's cute. Kirk has the spaniel he was using as a heat pack prior to his hip replacement operation. One thing you can say about Daniels' stories is that you can never guess where they'll wind up. With a light and clever touch, she has Kirk saving the Vulcans from themselves yet again, while teasing Sarek and charming Amanda. I love Kate Daniels' style: "He loved Jim Kirk but the man had the concentration of a gnat—by Vulcan standards." "Kirk's plan was simplicity itself. Sarek was appalled but impressed. Kirk usually had that effect on him.")

SAFE by Patricia Roe (In the aftermath of Pon Farr, Spock realises how he feels for Kirk. This well-trodden path wouldn't have grabbed my interest if the characterisation and the visual detail had not been supplied so carefully. It was like watching the show. Before long, we are into 'The Doomsday Machine" and it is as the Constellation is drawn towards destruction that Kirk receives his own revelation of his feelings for Spock -and communicates it to Spock's mind. After this, Patricia brings the story to a nicely paced and satisfying resolution.)

TRIPTHYCH by Rosemary Heaton (A view of Kirk and Spock from one of Kirk's old girlfriends, recognising the love between our heroes, followed by Spock's own story from his personal log, then Kirk's. Nothing new here, I guess. Nothing to complain about, either.)

PARADISE INTERRUPTED by Anne Elliot (Kirk is jealous when, long after he and Spock are lovers, Leila Kalomi pops up again. Anne, I'm sorry, I want to like your writing but I just can't picture adults behaving like this (even adult males.) Kirk is a starship commander, not a prima donna having a tantrum! Please. And why would Spock put up with such behaviour? Oh dear, I dislike friction between these guys. I mean, deep angst is one thing but petty upsets diminish them. They are supposed to be heroes after all. Yes, this story is nicely written—I just didn't like the content.)

FINDING THE WAY by Anne Elliot (Is better, definitely more my type of story. Hurt-comfort with a heart-stopping plot, Kirk being brave, solving the problem with his usual flare, agonising over Spock's injuries and bringing him out of the healing trance in a gripping romantic scene. Strong plot, strong characterizations (thank you!) angst and love. Wonderful.)

SILK by Anne Elliot (Who has been busy writing K/S, which is great. I rather like the idea of Kirk in a low-cut, skimpy, sleeveless silk tunic, just for the bedroom. But I think Kirk would actually like wearing it, he is vain after all. I notice Spock is giving in to Kirk's wishes again. Sigh.)

FALLS THE SHADOW by Anne Elliot (Now, this is an excellent piece and, I think, the most powerfully written story in the zine. Kirk and Spock have been bonded for twelve years. For eight of those years, Kirk has had 'secret' affairs with various women. He believes Spock doesn't know. McCoy accidentally finds out and confronts each man. Kirk is unrepentant. Spock will put up with it. No K/S fan is going to like this portrayal but I believe the powerful writing and psychological realism makes it a valid vision, or nightmare. Like the editor, I was chilled because, within its own terms, this story is painfully believable. But not in my universe!)

BENEFIT OF CLERGY by Eva Stewart (Finally, the unique and special Kirk and Spock of Eva's long-running, established-relationship series, get married. But not until they can be sure that, by following Starfleet regulations they aren't participating in discrimination against unconventional unions. I love this Kirk and Spock. They are always so gentle with each other, and wise. Long may they relate, established.)

FOR A FEW QUATLOOS MORE by Jasper Murgatroyd (This went totally over my head—I don't do arithmetic at all. It wasn't a very romantic story, was it?)

A great zine, Rosemary, and worth waiting for. [2]