Singing in the Wilderness 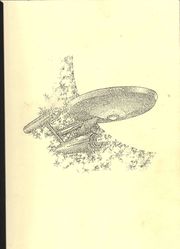 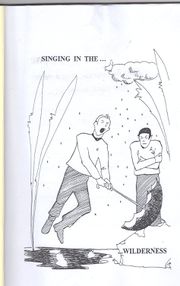 Singing In the Wilderness is a 108-page K/S slash Star Trek: TOS anthology. The art is by A. Humphries.

Way back in 1982, two fen looked up from the zines they were reading, looked at each other and said, 'Hey, we can do this too!' And they did. They had the stories - two each! They had the technology - an elderly electric stencil printer (100 copies per minute) that went berserk when you took your eye off it. Most of all they had the enthusiasm. And so they wrote a zine. They called it THE VOICE 1 and they sold it. So they wrote some more. Kate came and they kept writing. Frances came and ... Finally after 5 issues, they said, "This is fun let's ask more people." The VOICE wasn't big enough so along came IN THE WILDERNESS (ITW for short) - all 7 of them. [1]

See reactions and reviews for Moving On.

See reactions and reviews for A Voice in Rama.

See reactions and reviews for The Child Within.

See reactions and reviews for Shadows.

See reactions and reviews for The Name of the Game.

See reactions and reviews for Lepidoptera.

See reactions and reviews for The Risk Business.

See reactions and reviews for Legend of Myth and Metamorphosis.

[art by A.H.]: I just loved the three adorable drawings of our heroes, doing exactly what this zine's title says - Singing in the Wilderness. I couldn't possibly pick a favorite among the three: an obviously miserable Vulcan, shivering in the chilly downpour while his captain, umbrella askew, shows him his version of 'Singing in the Rain’... three lusty kimono clad senior officers entertaining the crew with their version of 'HMS Pinafore' in Rec Room C...or an adoring Captain who's about to get soundly bonked on the head by his a First Officer who, costumed as Maria from 'The Sound of Music,' is greeting his lover with a zestful serenade. Absolutely charming renditions by someone with a rare talent for seeing the humor in many situations. I do hope we'll be honored with more of her drawings. [2]

[art by A.H.]: I really like the sort of cartoon art done by A.H. in the last two Wilderness zines, but especially the three pieces in Singing in the Wilderness. K/S with a lot of humor thrown in!

The frontispiece has Kirk literally singing in the rain, mouth enthusiastically open in song, his umbrella held off to the side because he doesn’t care he’s being pelted with rain. Actually, the cloud and raindrops seem to be hovering mainly over Spock, whose arms are wrapped around his torso while he shivers as his captain goes about his tuneful captainly business. The second piece portrays the three little maids from school in Gilbert and Sullivan’s The Mikado. Only the maids are Kirk, Spock and McCoy. Spock appears to be perfectly composed, even having the aplomb to have one leg back as if to prepare for a curtsey, but Kirk’s black wig is falling off, and McCoy’s is askew. The third is best of all. Kirk is being bopped on the head by a handbag that is being flung enthusiastically out by the outstretched arm of his first officer. Said first officer is attired in the dress and apron of the young postulant Maria from The Sound of Music, and it’s apparent that Spock/Maria is singing to the hills. The Enterprise sails serenely off into the sunset in the background.

Totally improbable, showing a shocking lack of respect for the fandom I adore, but.... I love it all! [3]