There are six volumes of this series. Most of them are story anthologies, with the usual mix of stories that you either like or you don't, depending on your taste. Most of them seem to be well-written, and I like what I've read so far. The best one, though, is Oh Boy! IV, which is a massive novel (400+ pages!) spanning from Sam and Al's first meeting to the end of Sam's Leaping (it was written during the fifth season, and ignores Mirror Image.) At first, it's odd to read, because it seems like the authors got their facts wrong. Sam and Al meet much earlier than the show hints at, for example. But this is because this is a prequel set in a world changed by Sam's Leaping, so there's a logical explanation for it. It's very well written, but hard to find for a reasonable price. [1] 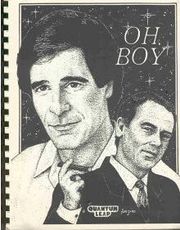 Oh Boy 1 contains 198 pages and was published in 1991. The cover and interior artwork is by [minds-i-view]. Nola Frame Gray cartoons throughout. 1992 FanQ nominee - Best QL Zine. Longer stories with a few poems interspersed. The pair of poems entitled "April 1, 1969", by Melissa Mastoris, were nominated for the QL poetry FanQ award. Sandy and Sharon were also nominated for the Best Editor FanQ, and the cover artist minds-eye-view was nominated as well.

Four out of five stars. Wonderful cover and interior art by <minds-eye-view>, with Nola Frame Gray cartoons throughout. Longer stories with a few poems interspersed. The pair of poems entitled "April 1, 1969", by Melissa Mastoris, were nominated for the QL poetry Fan Q award. 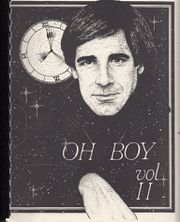 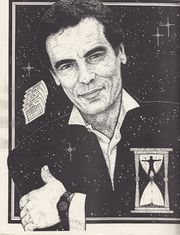 back cover of issue #2, minds-i-view 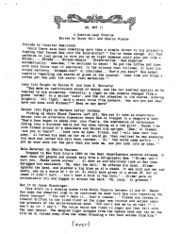 first page of a flyer for issue #2 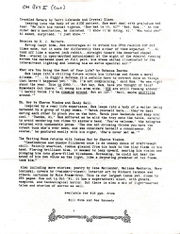 second page of a flyer for issue #2

"This is our largest issue yet, close to 250 pages. Due out in Oct '91, it has a supernatural slant, with ghosts, vampires, and technological horror. But there is also a mix of light-hearted tales and stories of sorrow as well."

[Troubled Waters]:Sam leaps into a dying HIV patient. He is estranged from his partner and Sam manages to effect a reconciliation and get his host out of the hospital in spite of his condition, so that he can die free of machines in his lover's arms on Venice Beach. Sympathetically written and somewhat moving. I don't think they'd film it, not even after Tom Hanks' performance (and several others), but I know that Scott could do it. [3]

[zine]: I just got _Oh, Boy #2_ from Peg Kennedy & Bill Hupe. It's a 4/10, due largely to lack of polish and omph in some stories, but mostly for the 1.5" margins at both top and bottom, 10-pitch Courier type, and lack of reduction. With normal 1" margins, the page count would have been reduced by 1/8th, about 12%. With (IMHO) perfectly acceptable 0.5" top-and-bottom margins, the pages would have gone from 8" of type vertically to 10", making possible a 25% reduction in page count. Peg and Bill aren't novices at fanzines. I expected better from them. (BTW, Bill seems to be agenting zines throught the mail for everyone and their auntie. I thought Dennetia did her own mail-sales, as well as agenting for others at cons. Is this a new trend for those fans too lazy to buy a fanzine listing every now and then?). [4]

Four out of five stars. Both covers by <minds-i-view> this time, more Nola Frame Gray cartoons, and an LOC section covering #1. The poetry includes two more Fan Q nominated poems, "Pulitzer Prize for Photography, 1970" (the winner) and "9 April 1970", both by Jane Mailander. Lots of in-joke stories this issue and some unusual cross-universes.

"Oh, Boy" - Sharon Wisdom and Sandy Hall. Sam leaps into a waiter and can't fathom what the ladies at table 4 are talking about. They started in archeology, moved on through comparing types of interrogation drugs and hypnosis, to obstetrical procedures and timeline splits. Meanwhile he has to doge the ladies at table 6, having dinner before going on to a Chippendale's show. Fun in-joke, especially if the topics ring a bell.

"Prelude" - Jennifer Smallwood. Another look at how government bureaucrats drove Sam to the initial leap. This issue's Waiting Room story features Joshua Raye. But wait a minute, you say, how long was he really in the waiting room. Let's just say that you-know-who wasn't only there to torment Sam.

"Greatest American Leaper" - Elaine and Anne Batterby. Two of Elaine and Anne's light cross-universe tales are in this issue. Sam doesn't get the hang of the suit any better than Ralph did. followed by "Leap into Knight (Michael, That Is...)" KITT can tell Sam isn't Michael, and can detect Al, so they have a little trouble getting his cooperation. Both are adventure stories with lots of "how does Sam fit in" jokes.

"Reunion" - D. J. Waters. Another "after the end" story. Al drags Sam along to a reunion at Mayport Naval Station. Everything's fine until Al sees a familiar face across the room. Eerie tale.

"Role Reversal" - Sheila Paulson (1992 Fan Q nominee - Best QL story) Another Ghostbusters tale. Al has a little trouble with a large purple dog on a NY street, then gets caught in the Ghostbusters beams, pulling him into 1990. Wonderfully fun story. Slimer, of course, wants to be Al's friend... he doesn't like the idea much, but he needs their help to get home again.

"What are You Doing the Rest of Your Life" - Rebecca Reeves. Sam leaps well into his own future, to a very unpleasant society. Interesting view of how a government with too much power would deal with a genius like Sam.

"Detour Into Night" - Barbara Jackson. Sam and Al in the twilight zone, a dimension of vampires and strange goings-on in a haunted castle. Interesting, but doesn't fit the show very well.

"Mark of Sinanju (or the Case of the Reluctant Assassin)" - Sandy Hall. Another cross-universe, but I never saw the original movie. Adventure tale, with Sam learning skills to re-integrate his memory, maybe. [5] 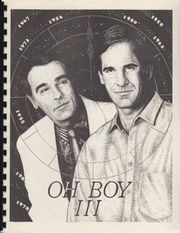 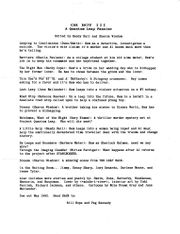 From Media Monitor: "Sam investigates a suicide, Sam's a bride on his wedding day kidnapped by a former lover; Sam leaps into a violent situation on a New York subway; a missing scene from 'The Leap Back.'"

Four out of five stars. Includes 3 FanQ-nominated stories, LOCs for #2, art by the winning artist < minds-i-view >, cartoons by Nola Frame-Gray and Jane Mailander, poetry and 5 "Waiting Room" stories. I love what they've done with this story concept. warning for those who don't like reading them - there are death stories in this zine. 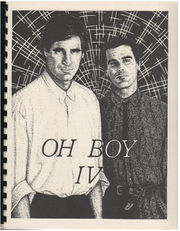 Oh Boy 4 was published in May 1993. It is a 487-page novel called "Love and Glory" and is based in part on "Bookends," a short story by Terri Librande. The novel is by Sandy Hall, Sharon Wisdom and Michelle Agnew. Cover and interior artwork by [minds-i-view]. It follows Sam and Al through their first meeting through the end of Sam's leaping (although it does not take into account the fifth season and the series finale).

For one (and, IMVHO one of the best) takes on this and many other questions regarding _QL_, I *strongly* recommend the fanfic novel _Love and Glory_ (_Oh, Boy IV_). It's slightly alternate-universe (the events of "MI" are not incorporated into it) but it ties together a *lot* of stuff DPB stuck into _QL_, in what is, to my mind, a *most* satisfying fashion. (Actually inspired me to write my first fanfic, at my ripe old age!) It's by Sandy Hall, Sharon Wisdom, and Michelle Agnew, (parts of it are based on a story by our very own Terri Librande). [7]

I agree 100% with this assessment. It is still available from Peg and Bill cause I ordered it not too long ago. It is amazing how much thought and detail went into that zine. I am continually amazed at how many things that I thought were made up by the authors were in fact grounded in canon in an episode that I just hadn't picked up on before. I strongly recommend this zine to anyone who is interested in reading any fanfic. IMHO it is way better than the "professional" books we have seen and much more accurate. It may seem expensive, but keep in mind that it is 500 pages or so. Enjoy![8]

Thanks for the compliment. I'm thinking seriously of trying to post the original story, "Bookends" on the net...it's a huge thing and I don't know if I can but I could try. I'm glad you all liked it and I will pass the message onto Sandy, Sharon, and Michelle. And Minds/Eye/View who I think is a brilliant artist!!! Terri in Cleveland [9] 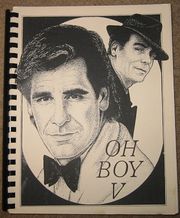 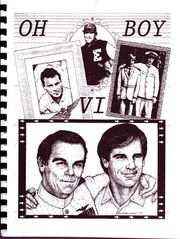 Two fans must have gotten something worked out...

I'm pulling my story from Sandy Hall's next zine "Oh Boy". My story is called "Fed Up". I'm doing my best to notify her but I'm not sure I'll be able to reach her. I don't have her address and it seems that no one else seems to have it either. I haven't heard from her since before she moved. She has made no effort to contact me regarding the zine or my story. Since it has been over a year since I sent my story to her and due to the fact that she hasn't contacted me I feel safe in assuming that she isn't going to publish. [10]