From Fanlore
< Mulder(Redirected from MSSS)
Jump to: navigation, search 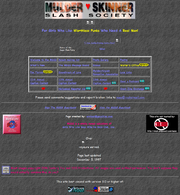 The motto of the Mulder/Skinner Slash Society was: For Girls Who Like Worthless Punks Who Need A Real Man!

The MSSS had a link to the X-Slash mailing list, featured a soundtrack of love, a few essays, caption contests, links, a slash zine exchange, a page for Walter's Office, and of course M/Sk slash fanfiction!

MSSS was a wholly owned subsidiary of the Girls Who Like Boys Who Do Boys Club, Inc., which also owned the Mulder/Krycek Romantics Association, the Due South Romance Association, and The X-Files Fanfic Hall of Shame.

So go back in time to an era when classic authors like torch, A. Leigh-Anne Childe, JiM, and DBKate were still writing XF. See Woodinat's insane and very funny "Deny Everything--Especially Pendrell's Death." Find out why this story and so many others in that time period had eggbeaters in them. Visit an era in which I read Mulder/Skinner (though I couldn't write it). Me, I'm glad it's all still there.... [1]