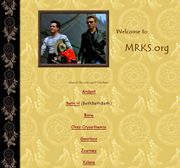 According to Rhiannon Bury in Cyberspaces of Their Own: Female Fandoms Online, "the Militant RayK Separatists aka MRKS mailing list was founded on Topica (later transferred to Yahoo) in November 1999 by five members of Serge," which was at that time the only Due South slash list devoted to the Fraser/RayK pairing.

According to founder AuKestrel, "Some of us had been active in defending Ray Kowalski on a Both Rays type list, and some of the Ray Vecchio fans started calling Ray Kowalski fans 'Ray K separatists.' We thought it was funny, and added 'militant' to the moniker, so when we came up with the idea for the list, MRKS seemed like a natural. [1]

MRKS also formed a domain -- mrks.org (hosted by SlashCity)-- that serves as an archive for many notable RayK-centric writers in the fandom, including Bone, Crysothemis, Kat Allison, and Kellie Matthews.

Contrary to assertions made elsewhere, the term "militant" was added to the name because the Ray Vecchio fans made such a fuss about "Ray K separatists" and not to perpetuate the Ray Wars.

The list was a private list of fewer than 30 people whose name was known only to its members; the public web site simply contains the words "MRKS" at the top of the site, with a .jpg of Benton Fraser and Ray Kowalski. No explanation of the words was contained on the site. Therefore it doesn't make much sense to say that it contributed to the Ray Wars hostilities when most people had no idea what the acronym "MRKS" stood for.

Sites part of MRKS.org at some point include:

This mailing list was discussed heavily in the book "Cyberspaces of Their Own: Female Fandoms Online" by Rhiannon Bury (2005), as well as the article Of Mounties and Gay Marriage: Canadian Television, American Fans, and the Virtual Heterotopia (2004).