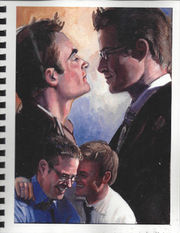 cover of issue #1, the title is "Devoted," the author Lorraine Brevig 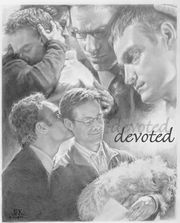 inside art by Jean Kluge

Love Noir 1 was published in 2011 and contains 183 pages. The fiction is by Candy Apple, Storyfan and Nyteflyer. The cover is by Lorraine Brevig and the interior art by Jean Kluge, the latter which won a 2012 Fan Q Award. Kluge's art may be "Devoted" seen here.

This fic is specifically in regards to the Donald Strachey movies, so as long as you’ve watched at least one of the movies, you know enough to get into the universe.

Second, the wonderful thing about the Donald Strachey Mysteries is that they lend themselves so well to wonderfully detailed casefics, where you get so caught up in the fic that you don’t realize whodunnit or the fact that you just read straight through your bedtime and to your morning alarm. Candy Apple is one of the greatest authors in the Donald Strachey Mysteries fandom, and this is one of her absolute best works.

While the true guts of the story is about what’s going on with Donald as and Kenny, along with Detective Bub Bailey investigate a missing persons case, Timothy gets into a bit of a scrape on his own. Always the impeccably dressed one, Timothy lands an amateur modeling job, and somewhere along the way attracts a stalker.

I love fics that keep you guessing, and keep you glued to the page, and this is definitely one of them. [1]

Love Noir Deux was published in 2012 and contains 171 pages. It debuted at MediaWest*Con. It has a cover by Lorraine Brevig. 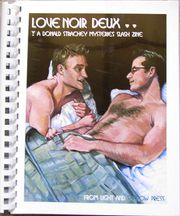