Liberated is a medium-sized, nonselective Blake's 7 archive for adult fanfiction and art. Its tagline is "A Blakes 7 Adult Archive".

Though it is sometimes referred to as a slash archive, Liberated accepts slash, het and "'adult' gen".

Founded in 1999 by Orac, it was among the earliest multi-author B7 archives. It was not the first all-adult archive, as An Avon/Tarrant Online Fiction Archive was already in existence by January of that year. 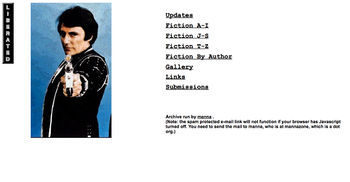 As of 2013, the archivist is Manna. The submission guidelines state: "I'm happy to archive most Blake's 7 adult fan material - fiction, art etc. Slash, het, and 'adult' gen are all welcome. The only exception is very explicit photomanips using the actors' faces, which I'm afraid will not be accepted." [1]

"Liberated" was founded on 19 November 1999 by Orac, as an adult offshoot from the "Blake's 7 Story Archive", later known as Hammer to Fall. Orac explains Due to changes at Oddworldz, adult stories from the story archive moved. The rest of the site will remain at Oddworldz, because Orac has better things to do than move its site over and over.[2]

The original url was http://www.wealh.co.uk/. The archivist was later referred to as "Emma". Liberated moved to its present url on 12 September 2002. Manna took over as archivist on 1 October 2004.

"Liberated" was last updated on 8 December 2007. The archive remains online as of Septmber 2015.

Marian Mendez describes the archive: "Lots of adult and or HME B7 fan-fic, also an art gallery-including nudes and HME & a forum for commenting on stories. Liberated accepts submissions of B7 adult art or fiction. Adult Only site."[3] Executrix, in her Crack Van fandom overview, calls it "wonderful".[4]