Needs Citation: This article or section needs more citations. See Fanlore:Citation for more information on why.

Kageyama Shigeo, nicknamed Mob, is the protagonist of Mob Psycho 100. He is nicknamed Mob (モブ Mobu) (meaning "background character") for lacking a sense of presence. He is an average and inconspicuous middle school boy, except for the fact that he is a powerful esper.

The story begins with Shigeo, aka Mob, wanting to ask out his crush, Tsubomi Takane, but being too shy to do so. His psychic powers failed to impress her, so he joins the Body Improvement Club to try and gain masculine appeal. Meanwhile, powerful espers and evil spirits are up to no good in Seasoning City, where Shigeo lives. At first, he is just performing simple exorcisms with conman Reigen Arataka for 300 yen an hour, but he becomes wrapped up in world domination plots and brainwashing cults. He is a powerful esper, but when he becomes extremely emotional, his powers often hurt people and things around him, so he tries to repress his feelings at all times. Over the course of the story, he learns to deal with his emotions.

Canon works include the original webcomic/manga, an anime by Studio Bones, a Netflix live-action adaptation, stage-plays and audio dramas.

Shigeo's canon love interest, Tsubomi, is usually ignored by the fandom. Instead, Shigeo is often shipped with Reigen, though other fans strongly disapprove of this. Ritsumob, an incest ship, is also condemned in some circles but popular elsewhere. Terumob is generally considered less problematic, although Teruki tried to kill Shigeo when they first met.

He is often depicted with milk or dressed like a cow, due to canon stating he enjoys drinking milk. He is also often shown with or as a cat, due to a manga scene where a cat he befriended was killed. It became a common fanon trope to give Shigeo a pet cat named Milk.

The cat killing scene was absent from the anime, which caused some controversy and discourse on tumblr.

Shigeo's age is often changed in the fandom. There is the Same Age AU where he and Reigen are both children or both adults, and the Reverse Age AU/Role Reversal where Shigeo is an adult and Reigen is a child.

His appearance is also altered by fans at times. In A Breach of Trust and the recursive fandom it spawned, Shigeo is depicted with long, sometimes dirty or tangled, hair to emphasize his neglect. Some fans enjoy drawing him in his crossdressing disguise, a red schoolgirl outfit with braids. As an adult in the Reverse Age AU, he is usually depicted wearing a gray turtleneck, black coat and black earrings.

Mob is often interpreted as autistic-coded by autistic fans. There is one tumblr blog dedicated to showing evidence of this, simply titled Mob is Autistic. Their header reads 'cause im tired of people saying its "just a personal headcanon"'.

Others prefer to see autistic Mob as a headcanon. In a reply to a post about autistic and ace headcanons, friendbot said:

They’re not “autistic-coded” just because they have traits similar to autism. I love ONE but that is giving him far too much credit. Finding comfort in these similarities and making headcanons is cool, but that doesn’t make them canon.
https://spicyartinsp.tumblr.com/post/182191991388/so-i-saw-this-post-for-a-discord-server-saying#notes

Autistic fans often fought with allistic fans over the fanon portrayal of Mob, arguing that he was being infantilized in an ableist manner for his autistic traits. As jellyana explained:

he has a relatively cute character design and is soft-spoken and kind of clueless at times which brings out a want to protect a character, brings out empathy, brings out this babying. but for one thing, its frustrating to constantly be treating a teenager in a bildungsroman as a small helpless child. mob is not that at all! it’s a misrepresentation of the character.

and another, kind of huge thing is that mob is pretty obviously coded as someone on the autism spectrum. and it’s very common for neurotypical people to treat autistic teenagers and adults like children by belittling them, constantly pitying them, erasing their voice, and telling them they are weak and incapable. a lot of people are treated as if they’re younger than they actually are and are patronized for behavior like…not showcasing facial expressions. lack of understanding of other’s emotions/ having difficulty with social communication. limited interests in “normal” things and, conversely, a preoccupation with a certain special interest. does this. uh. ring a bell?

so anyway its valid that mob can strike up emotions of care and protection, he’s a good boy, i get it! but people go overboard and it gets dehumanizing and infantilizing. which is not good.
https://jellyana.tumblr.com/post/165567893980/genuine-question-may-i-ask-about-the-problematic

There are 45 fics tagged Autistic Kageyama "Mob" Shigeo on Archive of Our Own.[1] 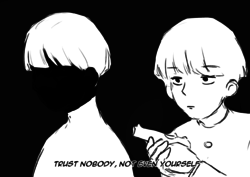 by art-rica, a variant of the Redraw Reigen meme