Discourse is a fan term for discussion, debate, and/or arguments. It is especially popular on Tumblr; on other platforms such as dreamwidth, the term is more likely to be used to describe the types of conversations happening on Tumblr (i.e. Tumblr discourse). It is sometimes capitalized, implying that the Discourse is about a particular topic or is conducted in a certain way.

There is discourse about when the word "discourse" first became widely used.

According to memearchives, "The Discourse" was originally a tumblr meme in 2015, although it was previously in use among communist anime fans circa 2012.

The word “discourse” became more popular in March 2015 with posts such as thesetwo, which can be seen as precursors to the current meme. As far as I can tell, memetic usage of “The Discourse” to refer to particularly bad tumblr arguments started April 1, 2015 with natawhat’s post that captioned a screenshot “The Discourse” as if it were a piece of art.[1]

Many fans will jokingly spell "discourse" as "disk horse" (or use the emoji 💿🐴) as a way of poking fun at the term and concept.[2]

fun fact: i never saw Discourse until 2015. lots of “meta” and “wank” and long, thoughtful, sometimes passive-aggressively informative posts but the Discourse™ references did not appear on my (fairly isolated, non-wanky) dash before then" [3]

i am an academic and also a fandom person and have been both these things for years and i can truthfully say that fandom has just coopted ‘discourse’ in the last few months to replace 'meta’, 'discussion’, and 'wank’. it’s up to you which truth value you give to any particular 'discourse’ in any given situation. i love the idea of 'discourse’ as it suggests 'healthy non-confrontational informed dialogue about the thing’. sadly it has stopped meaning that and has turned into 'FUCK OFF YOU ACE PERSON YOU DON’T EXIST’. so. uh." [4]

As near as I can tell, it means “don’t call it wank, I am wanking about Very Serious Issues, you guys!" [5] 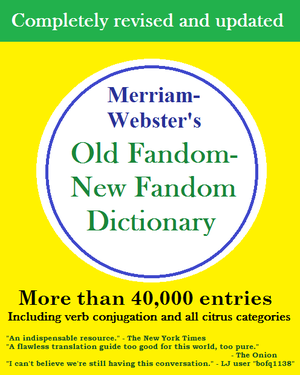 I know discourse is the word of choice in fandom nowadays but I kind of wish we would have stuck with “fandom wank” because it carries the implication that the anger involved culminated into effectively nothing and that the act was wholeheartedly masturbatory in nature rather than for any greater cause.[6]

berlynn-wohl responded with an edit of an Old Fandom-New Fandom Dictionary. The post has gained over 130,000 notes.[7]