You may be looking for the Sentinel story Heart/Soul by Donna Gentry or the third issue of Ancient's Gate which is called "Heart and Soul".

Heart and Soul is a Starsky and Hutch primarily slash fanzine.

Content is almost all by Charlotte Frost. Sylvia Bond is the author of a single story in the first issue.

These zines contain no cover or inside art.

This Zine's Beginnings: History, Labels and Such

It was't officially called HEART AND SOUL 1 -- though it was later referred to as that -- because I didn't know that there would be subsequent issues.

My very first SH stories -- "A Time for Change" and "Waterfall" -- had been published in a multi-media series called PLAYFELLOWS. After writing those, and some Twin Peaks stories that didn't have a fandom, and with having burned out on Kirk/Spock, I made the decision to switch to SH fandom. Even though, as detailed in early posts, seeing the SH series as a teenager was one of the most significant events over the course of my life, it was quite an adjustment to switching to writing different characters.

That was 1994. (Geez, 20 years ago!) The internet wouldn't become mainstream for a few more years, though some fans were using it in its infancy. Mostly, though, fandom interaction was conducted via snail mail.

What I loved most about the S&H series was the warm fuzzies between the characters, and that's what I wanted to write about. Therefore, of the six stories in the fanzine, the only one that had a cop plot was Sylvia Bond's "Hour of Separation". Sylvia was a local fan who become a good friend, so much so that she rented a room in my house for six months. That was the period of time when I was writing the stories that would be included in HAS, and I invited her to contribute something.

My biggest dilemma was how to characterize my first fanzine. There was definitely sex in some of the stories but, in the realm of slash fanzines, the sex was pretty lightweight. The stories were also somewhat lacking in the drama area, as the plots centered more around feelings than events. It definitely wasn't a genzine. So, I ended up calling it slash. At the time, it was common for publishers to distribute flyers for a new zine, with information about the contents. When I gave a blurb on each story, I ended up calling a lot of them "pre-slash". [1]

When I published my first fanzine with my own stories -- Heart and Soul 1 -- it was quite a dilemma to try to figure out what to call it. A couple of the stories were, to my mind, clearly gen. A couple were pre-slash. One had a first-time sex scene. If I called it slash, it seemed a lot of readers would feel let down that there was so little sex. But ultimately, I decided that's what I had to call it. The fans accepted it fine, except I did get hear from one dismayed reader. I had an anonymous feedback form to send back, and one of the people that returned it let me know that she was quite disappointed in the lack of sex. If I would have had her name and address, I would have refunded her money, because I could understand how she felt misled. [2] 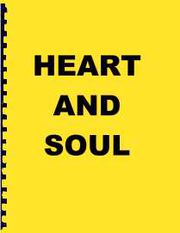 See reactions and reviews for Hero.

See reactions and reviews for Walls of Glass.

See reactions and reviews for Lying in Wait.

See reactions and reviews for Hour of Separation.

Heart and Soul 1 features several 'first time' stories. "Walls of Glass" is my favorite perhaps because the lead-in of Starsky's reaction to ST 2: The Wrath of Khan is so dead-on and in character. Is there canon in the show for him to be a ST TOS fan? (my mind is going) I could easily see how the discussion was triggered and led to....... well, you know.

The first story in the zine "Sacred Place" is a Starsky POV concerning his relationship with Hutch and how his date reacts. Those who think Starsky is often bullied by his partner may sympathize with the date... But I can see both sides of the issue... And it does present Starsky's take on the way Hutch behaves (esp. in Season 4--- but let's not go there).

The stories are all well-written....the only thing I could wish for is for illustrations... Suzan Lovett illos with lots of naked... Never mind. [3]

[comments and feedback to the author when the zine was published]: When readers were asked, "Any Other Comments?", here are some things they said, as well as answers to other questions that seemed to fit this question. Also, there's some general excerpts from other feedback received on HEART AND SOUL. 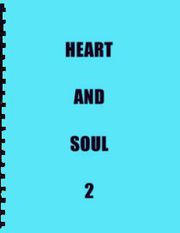 See reactions and reviews for Reflections of a Microbiologist.

See reactions and reviews for Keep it Precious.

See reactions and reviews for Packages.

See reactions and reviews for The General. 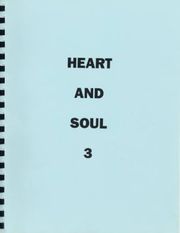 Welcome to HEART AND SOUL 3. This will be brief so you can get to the stories. There seems to be a lot of first time scenarios this time around, as well as the usual hurt/comfort situations. I hope to have at least one established relationship story in the next edition of this zine, as I have an idea in mind for a sequel to "The General", which appeared in HAS 2.

Speaking of HAS 2, "Compassion's Heart" was the runaway hit of the zine, which leaves me worried that this edition doesn't have a story equally as strong. But I'll leave that ultimate determination to the readers. Of course, my usual LoC form is enclosed with this zine. Comments are also welcome via my internet address, below.

See reactions and reviews for Spoils of War.

See reactions and reviews for Romeo and Juliet.

See reactions and reviews for Jenni.

See reactions and reviews for Greek. 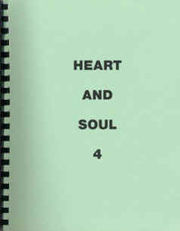 See reactions and reviews for Butch and Sundance.

See reactions and reviews for The Heart Knows.

See reactions and reviews for Sink or Swim.

See reactions and reviews for Girlfriend. 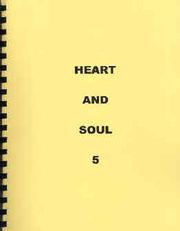 Welcome to HEART AND SOUL 5. It's been eighteen months since my last zine, but the wait won't be near as long for the next one. HAS 6 is three-quarters complete and I expect it to be finished in time to debut at MountainMedia Con in July.

All four stories in this zine are quite different from each other. I usually like to fill up this space with mention of the various things that inspired some of the stories, but I can't do that this time around. This is an unusual group in that the origination of the stories can't be linked to any particular creative jump-start; only that the separated-and-thinking-each-other-dead theme that starts "Sanctuary" was something that I used to imagine when I was a teenager and the Starsky & Hutch originally aired.

The novella turned out to be quite different than I ever thought back then.

The face of fandom seems to have changed a lot since the publication of PHANTOMS. There is now considerably more activity online, and I have enjoyed participating in a few of the lists. One topic that received discussion last Autumn was that of feedback. I complained about the lack of it, and others shared their thoughts and experiences. Readers' reasons for not writing LoCs (letters of comment") ranged from not realizing that fandom writers in general receive very little feedback; to being discouraged from writing a LoC for fear of not being able to talk "up to" the author's level; to being reluctant to give feedback because of past experience with the recipient reacting badly to constructive criticism; to simply being too lazy to share their thoughts on the stories with the authors and editors who created them. For those who weren't privy to that discussion, I'll reiterate here that there is nothing more discouraging to a fan writer than total silence after putting so much effort into creating a story and bringing it to print. If you enjoy what you're reading - in any fandom - make sure the people who bring those stories to you know how you feel. Ican't speak for others, but for myself, I am also interested in what the readers dislike. I don't see much point in bringing to print those stories, themes, or ideas that appeal only to a small minority. Idon't know what readers like and dislike unless they tell me. Contrary to popular belief, authors and editors do not automatically know what the readers think.

For the sake of the newer online generation, I'd like to mention that it was customary in the past to write a Letter of Comment (LoC) to the editor of a zine after reading it, giving their thoughts, feelings, and constructive critiques of the stories in the zine. Such a LoC does not need to be an English essay in order to be helpful and worthwhile for the recipients. There is no particular format that needs to followed. Simply sharing your thoughts, feelings, enthusiasms, disagreements, etc. regarding the stories is all that is needed - whether in person, via a letter, or via an email message. At the very least, such feedback lets the authors know the stories were read- something that silence does not.

I'd like to welcome Flamingo to my list of editors. An extra set of red ink on the rough drafts can only serve to make my stories better, and I appreciate her help with this issue. Beth Cambre and [Trish] have been lending their assistance since my first efforts at publishing, and I feel I've done them an injustice by having referred to them in the past as "proofreaders". All those who have assisted with my zines do so much more than that, so I've correctly labeled everyone as editors this time around. I take sole responsibility for any typos or other readability mistakes, as Iwas the last proofreader after the manuscript was tweaked a final time.

As mentioned above, HAS 6 is well on its way to fruition. I'm also pecking at a novel that I've had in progress for over a year now. Perhaps that will follow in the new millennium.

See reactions and reviews for Sanctuary.

See reactions and reviews for Warrior of the Past.

See reactions and reviews for Sin and Prejudice. 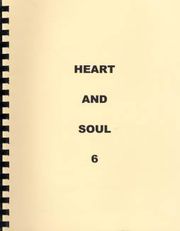 See reactions and review for Sexperts.

See reactions and reviews for Adventure.

See reactions and reviews for A Question of Merit.