Ancient's Gate is a series of anthologies. Some are gen, some are slash and some are both. 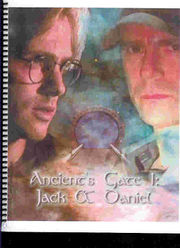 Ancient's Gate 1 is slash. Its subtitle is "Jack and Daniel." It was published in December 2004 and contains 271 pages. 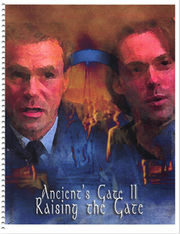 Ancient's Gate 2 is gen. Its subtitle is "Raising the Gate." It was published in December 2004 and contains 201 pages.

I have such lovely friends.

For all ot the above and so much more, my dears, I can only offer a heartfelt.. .thank you. 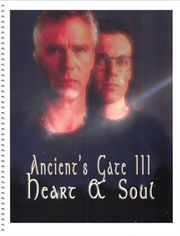 Ancient's Gate 3 is slash. Its subtitle is "Heart and Soul." It contains 250 pages and while undated, was published in December 2004.

This one has been an effort. Busy times for all of us, the beginning of the holidays and real life stresses. For myself, I'm a heartbeat (okay a longish one) from achieving a goal I've worked towards for nearly three years. It's exciting, it's rewarding, but it's also a little frightening, too. I'm too old to start over, but do it 1 shall. And I know I'll have you guys there to keep me focussed on the goal. For which I can never thank you enough. 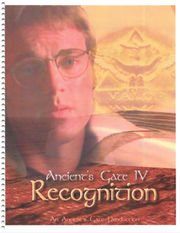 Ancient's Gate 4 is both gen and slash. Its subtitle is "Recognition." It contains 371 pages. While dated, it was published in 2005.

Stargate canon refuses, to date, to render Daniel the recognition and acclaim many ot us believe he deserves. It's neither right nor fair that Daniel, unlike his scientific counterpart on the team, is not given due credit tor opening the gate, tor his many accomplishments and sacrifices as a result ot opening it, has very rarely been given due recognition by his co-workers, much less his peers, and cannot publish non-essential findings he discovers through the gate. Herein we seek to rectify that injustice and hope, some day, canon will too. Here's to the inimitable Doctor Daniel Jackson. There's never been another like him, and the world is the poorer tor it. He deserves all contained within these pages and so much more.

As always, many thanks to the writers who made this tribute come to lite so brilliantly. 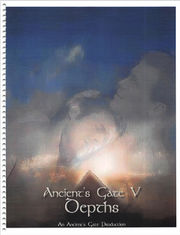 Ancient's Gate 5 is slash. Its subtitle is "Depths." It contains 225 pages and while undated, was published in January 2005.

A new year is ahead of us now and with it a sense of hope and enduring renewal. It is out sincere desire that everyone travel through the new year in peace, comfort, and health.

Herein we hope you will find inspiration for all those things with the inimitable pair that is Jack and Daniel. Despite coming changes for the show, these two will live forever in our hearts, in our minds, and in our imaginations. Here's to many, many years of continuing adventures and abiding love for our two boys. 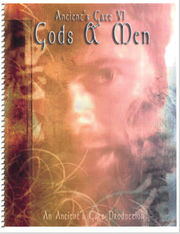 This is the httle gen zine that could... but almost didn't. It's been a tough road to get this one filled enough to publish, but we're finally there. As always, thanks so much to the authors and contributors for making it possibly. I never forget how truly blessed I am to know you all.

As some of you know, [personal info redacted] so I'm somewhat more scattered than usual. I tried to get a story going, but didn't make it this time. This is the first time I've not added anything to a zine and I hope it will be the last. 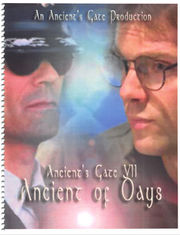 Ancient's Gate 7 is slash. Its subtitle is "Ancient of Days." It was published in 2005 and contains 248 pages.

We're pleased to bring you AG7, almost a year of zines now and you have all been inordinately kind and supportive. I hope we can continue to bring you the kind of stories you enjoy from the writers I, and you, enjoy so much.

There are lots of changes happening on the show, lots of attitudes evolving. One thing I can promise... Jack and Daniel, the souls of SGI, will always be first and foremost with us. I won't promise the new colonel won't appear in future stories, but I have no intention of ever printing slash stories including him. For me, the essence of the friendship of Jack and Daniel was the reason for slash... the emotion squared was the reason I wrote it and read it. That doesn't exist for me with the new character... I'm not in it just to slash any two characters and never have been. It's never been about writing sex for me and never will be; it's about a love between two men that didn't mind if people thought they were 'confident heterosexuals' or not. They just cared down to their souls and it was a beautiful, platonic thing.

Slash is, for me, a what if with a foundation. The foundation, regardless of what happens in the show from now on, is Jack and Daniel. Always will be. 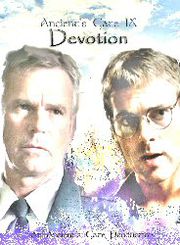 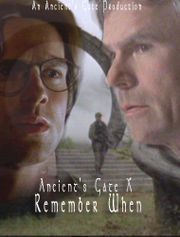 Ancient's Gate 10 is gen. Its subtitle is "Remember When." It contains 200 pages. 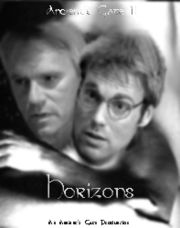 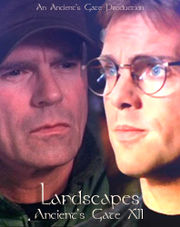 Ancient's Gate 12 is gen. Its subtitle is called "Landscapes." It was published in 2006 and contains 200 pages. 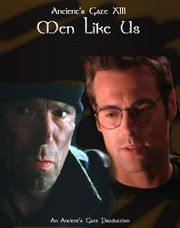 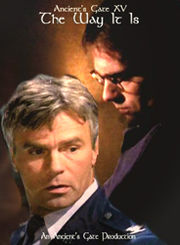 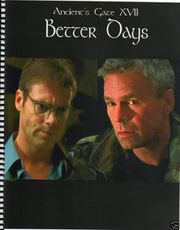 Ancient's Gate 17 is both gen and slash. Its subtitle is "Better Days." It was published in 2008 and contains 236 pages. 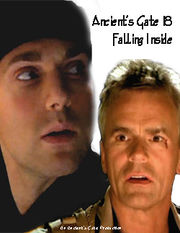 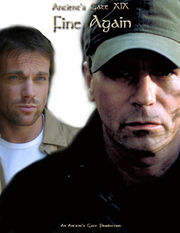