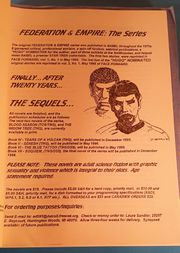 Federation & Empire: The Series is a collection of gen stories. Four of them were published in Babel in the early 1970s.

They were later republished as stand-alone novels, with the author apparently adding Star Trek: The Next Generation to the mix. Each zine is around 170 pages long. It is unclear how the original four stories were incorporated in these standalones.

The original series is about the mirror universe depicted in the Star Trek episode "Mirror, Mirror", that moves into the Next Generation and beyond.

The 1990s novels required an age statement to purchase; all relationships depicted were heterosexual. "PLEASE NOTE: these novels are adult science fition sic with graphic sexuality and violence which is integral to their plots."

These stories were mentioned in Star Trek Lives!.

From the author in The Widow Tree:

It garnered critical, professional acclaim, a spin-off fandom, satirical publications, a Hugo nomination for the author, part of thee exhibits at the Smithsonian, and helped make Babel a premier Star Trek collectable.