The community states: "Fan Art, Drabbles, Fan Fiction, Icons, Recs, Lists, Essays, Manips and anything else that you can do online that relates to S/R/L is welcome here."[1]

Fanworks containing Severus/Remus/Lily, Severus/Remus, Severus/Lily, and Remus/Lily are all allowed, but Severus, Remus, and Lily must all be main characters in the work. Lily especially must be "heavily featured" in Severus/Remus works.[1]

R- and NC-17-rated works are accepted but must be placed behind a cut, and warnings are required for themes such as kinks, violence, and "other adult situations." There are no content restrictions other than those related to shipping. A header is provided for art and fic, and flames "of any kind" are not allowed.[1]

In June, 2007, Dark Flowers announced that in anticipation for the release of Deathly Hallows and prevent fans from unwillingly being exposed to spoilers, community membership would be moderated, IP logging would be turned on for anonymous posts, and community members must adhere to a strict spoiler policy or else be banned. The spoiler policy stated that all spoilers were prohibited until September 30 unless "put it behind an cut tag and clearly marked [with] a spoiler warning." Additionally, stories, art, icons, and moodthemes containing spoilers or based on spoilers were also prohibited.[2]

In late January, the community moderators began posting challenge prompts, which were initially intended to be posted weekly. In March, it was changed to monthly prompts, which petered out following the release of Deathly Hallows in July. The prompts were as follows: 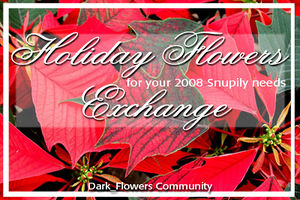 Banner for the Holiday Flowers Exchange.

Holiday Flower Exchange is a "secret santa" exchange. You sign up, get assigned a partner and draw/write a nice little gift for them and someone does the same for you! It's a win/win situation.

The focus of this exchange is Lily/Remus/Severus! All gifts will be Snupily focused so, how can anyone be unhappy? I know I'm thrilled, *ponders ones greediness* If you sign up and turn in your assignment you will recieve [sic] something in return. If you don't turn in your assignment....your name will be posted on the list of shame and you can't play next year.[4]

There were four stories and three pieces of fanart created for the challenge.[6]

In August, 2009, a poll was again created to gauge interest in an exchange. The September Flower Exchange was announced on September 2, following the same pattern as the 2008 Holiday Flowers Exchange.

There were eight stories and a two works of fanart created for the challenge.[8]

The 2010 Valentines Mini Exchange was announced in late January, 2010. It followed the same pattern as the two prior challenges.

There were eight stories and four works of fanart created for the challenge.[10]

The second exchange of 2010, the Fall Mini Exchange, was announced in August. It was similar to the previous exchanges but imposed a new rule of a 1000-word maximum on fanfiction and asked for "less-polished art":

Autumn and a host of Christmas exchanges are just around the corner. Come join our mini-fest to fire up the muses and work out your jitters. 1000 word limit and less-polished art are all we ask. Interested? Then come join the Snape, Lupin, Lily Fall Mini Exchange![11]

There were two stories and two works of fanart created for the challenge.[13]