You may be looking from the Man from U.N.C.L.E. 1980s underground story, The Clandestine Affair.

Clandestine Affairs is a slash Man from UNCLE anthology.

Clandestine Affairs 1 contains 170 pages and is spiral bound. It was published in 2002. 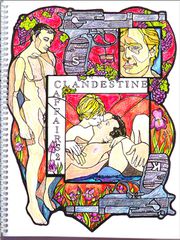 Clandestine Affairs 2 contains 276 pages. It was published in 2003.

See reactions and reviews for Waiting for Mr. Sternmacher.

See reactions and reviews for Window.

See reactions and reviews for While You Were Sleeping.

See reactions and reviews for The Back Door Affair.

[Times for Souls]: This story is unrelenting, heartbreaking angst. Wanting what you know you can never have doesn't mean you stop wanting it, doesn't mean you stop thinking about it; doesn't mean the hurt goes away. James captures Napoleon's innermost thoughts gorgeously and you won't be able to stop yourself for aching for our CEA before it's over. [1]

[Z-48]: Jane Terry has a knack for tumbling Napoleon and Illya into bed through scenarios that, at first glance, appear utterly implausible, but the longer you read, become completely believable. “Z-48” is just such a story, and since I seem to be stuck on “for the sake of the mission, we must have sex” stories right now, here's the ultimate example... For a man like Napoleon Solo who’s no stranger to using seduction in order to get information and do his job, a "honey pot" operation shouldn’t be a problem to undertake. However, when the assignment he’s drawn involves a man, and Napoleon’s never had a same-sex experience, the only way he can assume his undercover role without exposing himself as an agent is to learn how to have sex with a man. Where Illya comes in…well, you’ll just have to read to find out. [2]

[Disheveled]: Why this must be read: Because it's absolutely fabulous! And I am not so much addicted to superlatives. My top appraisal is usually "excellent" or "remarkable". Besides, it's not everyday you happen to read something where you wouldn't change a single word. Pushed to my limit, I'd go so far as saying that the "happy end" is somehow too happy for my conception of likeliness. But it's only me and I'm sure it would be a betterment for most readers. Otherwise the work is flawless.

Anyway, it's easy to get over any objection because the story takes place, if not in an alternate universe, at least in an alternate reality. Not that there were any irreducible contradiction with the admitted canon, but for the reason the stunning originality of the premises leaves the reader without his familiar landmarks. I can't tell anything about the setting and background of events and characters because the charm of the tale owes much to the slyness of the plot and the induced effect of surprise. If the e-zine Incognito should set out an emblematic example of its chosen theme, it would be this story.

Suffice to say it's a first person narrative, a difficult and perilous writing mode that gives the writer little freedom of expression and allows the reader to expect a more than fitting characterization. What is achieved here. We are enabled to hear the narrator's voice and it sounds so right that we can easily see the speaker's face and gestures, though they are not described, and sense the slightest slip of his mood and feelings though they are not always presented with total honesty.

Another remarkable achievement is the style, in perfect accordance with the narrator's uncommon personality and obliged double act: the mix of self restraint and boldness, calculation and ingenuity that defines the character is reflected in a text where the utmost economy of words and a cold objectivity is used to support and enhance the emotion. To quote the "marriage of fire and ice" is, assuredly, a terrible "cliche" but, here, I'd dare to do it, for it's completely justified. See by yourselves... [3]