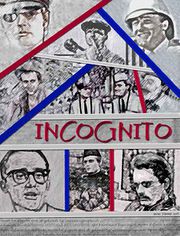 Incognito is a slash e-zine anthology. Summary from the publisher, "Napoleon Solo. Illya Kuryakin. Two men bound together by destiny and a love that dare not speak its name. Disguise is their weapon. But it can also be their toy..."

See reactions and reviews for Waiting for Mr. Sternmacher.

See reactions and reviews for The Flower Power Affair.

[Sometimes a Cigar...]: Any MFU fan will tell you that things are really bad when non-introspective Illya, the man who shrugs his shoulders and says "things are what they are", is troubled enough by nightmares to seek out a psychiatrist's advice

This story is a wonderfully revealing, character-driven gem of Freudian sleuthing. Contrary to the sexual innuendo of the title, "Sometimes A Cigar..." isn't about sex, but about everything else that makes life worth living – namely, other people and how we feel about them.

Nataliya has a marvelous ear for dialogue, and her Illya sounds as if he could've stepped right out of an episode. And even if Napoleon only makes a cameo appearance – well, he's certainly at the heart of the story. [1]

[Disciplinary Action]: Because into every fandom a little hooker!fic must fall.

Napoleon, I'm in Harlem, Jungle Alley on 133rd Street, I've been mugged, my wallet was stolen and I have no money for the subway or a cab, can you come and pick me up to take me home?

Got questions? So does Napoleon. How could Illya let someone catch him literally with his pants down? Why on earth would the Blond Bolshevik Bombshell need to pay for sex? Why, instead of turning to his attractive, attracted, and utterly trustworthy partner, would he rather keep hiring prostitutes and risk disgrace, exile, and physical harm?

For the answers (and an extremely tasty photomanip of Napoleon, courtesy of ndannais), click on the link. I should note that toward the end this story turns a leeeettle more Harlequin-romance-esque than I normally rec. On the other hand—dude, hooker!fic! [2]

[A Little Bondage Between Friends]: If there’s one thing this fandom has in spades it’s bondage, but it’s nice to see some that’s (almost) purely recreational for a change.

Mourning the loss of yet another suit as Illya takes a post-mission shower, Napoleon gripes, “Surely you could have gotten out of those ropes just a bit faster.”

Napoleon really ought to have known better.

Illya, who is as good at tying knots as he is at undoing them, trusses up his partner and challenges him to beat the Russian’s time of twenty-six-and-a-half minutes. And in order to make it a fair test, naturally he’ll have to provide Napoleon with some, ah, distractions… [3]

[The Heart of Stone Affair]: A long-term undercover assignment for Illya, and an accidental drug exposure form the underpinnings of a story that is truly the stuff crack fiction is made of. Sure, some of the dialog is a little stilted, but this story remains a guilty pleasure that I go back to again and again in my panoply of -- and yes, I swear this will be the last of its ilk that I’ll rec -- we must have sex for the sake of the mission stories. It doesn’t hurt either that it manages to hit a number of my Illya kinks: Illya undercover as a grad student in 1968 (don’t ask) (BING); long-haired and hot Illya (BING); Illya in jeans (don’t ask) (BING); sexually pragmatic Illya (BING, BING, BING!). Oh yeah, and the idea of Napoleon stoned, for some reason, just amuses me to no end. [4]

[Z-48]: Jane Terry has a knack for tumbling Napoleon and Illya into bed through scenarios that, at first glance, appear utterly implausible, but the longer you read, become completely believable. “Z-48” is just such a story, and since I seem to be stuck on “for the sake of the mission, we must have sex” stories right now, here's the ultimate example... For a man like Napoleon Solo who’s no stranger to using seduction in order to get information and do his job, a "honey pot" operation shouldn’t be a problem to undertake. However, when the assignment he’s drawn involves a man, and Napoleon’s never had a same-sex experience, the only way he can assume his undercover role without exposing himself as an agent is to learn how to have sex with a man. Where Illya comes in…well, you’ll just have to read to find out. [5]

[Crossing Boundaries]: My first rec appears in the e-zine Incognito, whose theme is disguise. "Crossing Boundaries" is an outstanding example of fine, firmly canon-rooted writing that takes us into levels of masquerade to explore the relationship between Napoleon and Illya. The solid canon base anchors the story's situations and lends it much of the background power TGab uses to springboard the final non-canon situation and resolution. The characterization is strong in a multi-layered story about friendship and sex and where the two cross or end. As always in TGab's stories, I feel there is more going on here than is described, that there are other levels eddying beneath the surface. Here, it's as though Napoleon keeps making up the person he wants Illya to be, even under the disguise, and then Illya shows his own person, but neither the reader nor Napoleon is sure it's real. The disguise theme overlays the deeper masquerade that lies between Napoleon and Illya in the first place. A beautiful piece of writing. [6]

[The Uninvited Guests Affair]: Like most readers of MFU fanfiction, I want to know what might have occured after the last picture of an episode has vanished from the screen: what was the aftermath of “The Master's Touch Affair”? Which durable effect could “Gurnius” have on the personal relations between the partners? Did “Children's Night” make Napoleon more aware of his feelings for Illya?

Fortunately, to fulfill these readers' demands, there are authors who like creating missing scenes or possible sequels. Among them Di T wrote some of the most shrewd and satisfying “missing parts”, like the emotional consequences of “Master's Touch” and a deliciously hot sex scene that could have taken place during “Shark”. The present story, published in the e-zine “Incognito”, answers the question you may have asked at the end of “Ultimate Computer”: What happened to “Filthy”?

Indeed, “Filthy” is Illya Kuryakine undercover in the Chaqua prison and we all know IK loves disguises and appears in many eps as a master of impersonation; However act playing may affect the actor and sometimes, when the play is really good, it affects the spectator as well. Here the fascinated spectator is Napoleon, of course. We'll see that, this time, with the help of some “uninvited guests”, the mutual perception of both men is going to be changed for ever.

Napoleon, suddenly, views his friend and partner with a fresh eye: "The lean and hungry look suits you. I was beginning to get quite fond of Filthy." But Illya is long to understand the advantage he could get from the situation, or perhaps he has become a little tired of playing games? “Illya had had enough of Filthy. Never mind what Napoleon said; he wanted rid of him and all that he brought with him. Filthy was dirty, sunburned, lousy and very, very hungry. It was time to move on. It was time to wash the last of Filthy down the plughole.“

Who will be the winner? Illya, the trustworthy partner and best mate? Filthy? “Shistiy”, the clean, smooth skinned creature issued from Napoleon's hands? Why not the real, deep buried, shy and loving man who hides under masks and acts?

Read and find the answer by yourself. That's a story I enjoyed to read the first time and enjoyed still more when I read it a second time before writing this presentation, because it's sweet and touching without being mushy, amusing and original, with a touch of weirdness while remaining plausible and because it offers a perfect balance between humour and sensibility. Moreover it's written...quite smoothly! [7]

[Passing the Time]: A wickedly funny and slashy interlude that captures the banter, rivalry and developing friendship between Napoleon and Illya.

The premise: Midway through the events of the first season episode Shark Affair, Napoleon and Illya are imprisoned in a cabin aboard a cruise liner. Napoleon is nursing a sore back after being whipped. Illya is starving after a bout of seasickness. Bored and frustrated, they start talking - and the conversation turns to the recreational activities that occur between Russian seamen stuck in submarines.

Illya's sly mischief is refreshing and so in-character. The way Napoleon seeks his assistance in a 're-enactment' is hilarious and sizzling. Don't worry if you haven't seen this episode - the characters are so engaging that they fill you in while you read. [8]