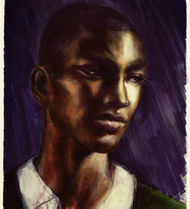 Blaise Zabini is a character from the Harry Potter books. Blaise is a Slytherin in Harry Potter's year, and is mentioned in the sorting scene in the first book as the final student to be sorted. Prior to Half-Blood Prince there was no other mention of Blaise in the books, causing much fan speculation. Fanon characterization of Blaise is the subject of much discussion.

In Half-Blood Prince, Blaise was revealed to be a tall black boy with "haughty" features and a mother who is renowned for being a beautiful seductress and having had many husbands. He was also confirmed to share Draco Malfoy's blood prejudice.

The Debate over Blaise Zabini

The character of Blaise is one of the most confusing in the fandom because so few details were stated in canon. Until shortly before Half-Blood Prince came out, even his sex had not been confirmed by J.K. Rowling. His gender was an especially hot topic of debate, as many fans had strong opinions on whether "Blaise" was a masculine or feminine name. Though discussion of his possible physical appearance was not uncommon, race was almost never mentioned: he was widely assumed to be white.

In 2004, J.K. Rowling confirmed that Blaise was male in response to a Portuguese translator's inquiry.[1][2] Previously, translations of the books were inconsistent as to whether Blaise was male or female.[3]

After the release of Half-Blood Prince, many fans refused to change their views of the character from what they had already established for themselves; others stopped using him in their fic or reading fic with him as a major character.[4][5] This was generally attributed to racism in fandom, though many fans insisted that it was just difficult for them to let go of a fanon characterization they had spend years cultivating.

As of 2012, some fans continue to portray Blaise as a white character, especially in roleplays, fanart, and other images on Tumblr, sparking continued discussion of whitewashing.[6]

As a consequence of the lack of canonical information before Half-Blood Prince, a number of alternate fanon characterizations of Blaise exist in fanworks. Some of the most popular include:

Some of the fandom believed that Blaise was a girl, and as a result, there are many fanfics with female Blaises, the most notable of which is Cassandra Clare's Draco Trilogy, which features a female Blaise as a character.

The initial uncertainty surrounding Blaise's gender, coupled with some fans' disappointment that Blaise was not canonically female, led to a handful of fanworks featuring a transgender!Blaise. One interesting fic of note is Alchemia Dent's fic Blaise, which features a Blaise not happy in his skin who finds the Mirror of Erised and sees himself as a girl. Similarly, Cast Your Own by minkhollow is a transfic featuring Blaise that was written for the 2010 LGBT Fest.

Some fans played on fandom's confusion surrounding Blaise's gender and portrayed him as appearing ambiguously male or female. This was done as a meta characterization or played up for humour, such as by having other characters be uncertain about Blaise's gender themselves.

One example of this is the Livejournal RPG Nocturne Alley's gender-neutral portrayal of Blaise as a_slytherin, a player with nondescript icons who refuses to reveal any identifying information, despite other characters repeatedly asking.

This is the most popular fanon characterization for Blaise, especially after JKR confirmed that Blaise was male. This Blaise has dark hair (often long, sometimes curly) with stereotypically "Italian" features. Usually tan and fit (comparisons to a "Greek god" were sometimes used).

In fanworks created post-HBP, the label "fanon!Blaise" usually refers to this version.

Before Blaise appeared in Half-Blood Prince, there were no confirmed details about his character aside from his name and house placement, so fans felt especially free to come up with their own ideas. Often this meant that he was more extreme than his canon companions, both in sexuality and in temperament.

Before his reveal, he was often used as a replacement in fanfiction for either Harry or Draco, depending on the author.

Blaise was often portrayed as a close friend or lover of Draco Malfoy, given that they are both in Slytherin and in the same year. However, he was also sometimes depicted as being outside Draco's group of friends, often because he doesn't agree with their prejudice against Muggle-borns. In such fics, his absence from canon was often attributed to him being very quiet—sometimes shy, sometimes calculating.

Because of his name, many authors gave Blaise an Italian background, sometimes as an Italian pure-blood, sometimes as a half-Italian or Italian-descended student. This has not faded much since the introduction of canon for his character, though it is slightly less common than it had been in the past.

Since HBP, Blaise is usually portrayed as a pure-blood, given that his mother is a witch and he is vocally disdainful of "blood traitors". However, some fans propose that the comment was made for show, perhaps to ingratiate himself with Malfoy and the other Slytherins, and that Blaise himself is not prejudiced, making him a sympathetic character to pair with a protagonist. Sometimes he is portrayed in fanworks as being sincere in his prejudice initially but is later reformed.

Blaise's (and his mother's) canonical good looks have occasionally led to fanworks in which Blaise is part Veela. One example of this is Maya's Drop Dead Gorgeous, in which Blaise plays a supporting role.

The most common Blaise pairing is with Draco Malfoy, but many others have had popularity over the years, both het and slash. Though uncommon, there are many minor Blaise pairings that feature cross-gen as well as those near his own age.