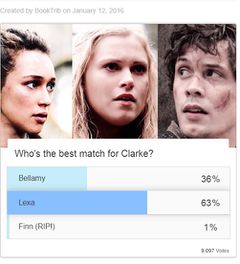 Since the beginning of the television series, there have been shippers of the pairing Bellamy Blake/Clarke Griffin, because they are arguably the two main characters. There may have been expectations from some fans of the pairing that it would become canon, as the two have a romantic relationship in the source material, The 100 book series.

In Season 2, the character of Commander Lexa was introduced, and she quickly became a fan favorite - plus, she was a canonically gay character. Some fans began shipping the pairing of Clarke Griffin/Lexa early on, but their popularity increased after Lexa kissed Clarke near the end of Season 2.[1] At this point, the showrunner Jason Rothenberg confirmed that Clarke is bisexual.[2]

The ship war started in Season 2, but began to heat up in advance of Season 3, when it was confirmed that Lexa would be returning to the series. The ship war continued early in the third season when Clarke was reunited with Lexa. The peak of the ship war seemed to occur in the weeks prior to, and following, the airing of the episode Thirteen, in which Lexa is killed shortly after consummating her relationship with Clarke.

Writing at The Learned Fangirl, Bethany Scettrini described some of the tactics used by Bellarke and Clexa shippers during the ship war:

Shippers on both sides employ various tactics to defend themselves and tear the other side down. One tactic is mostly polite discourse, in depth analysis that tries to demonstrate or prove why one ship is superior and the other inferior. Bellarkes often deconstruct Lexa and Clarke’s relationship in an effort to prove that it is abusive and toxic. Clexas often deconstruct Bellamy and Clarke’s relationship similarly to prove that they are only platonic friends. Interactions between these two groups can also escalate to name calling, “@-ing” or calling someone out directly by their handle on social media, “dragging,” mocking, appropriating fanart and other fan productions, and intentionally seeking out tags in order to argue or harass.[3]

Unlike other ship wars, in which the show's creators often learn about the conflict tangentially, fans expressed themselves by directly contacting the writers and the showrunner, Jason Rothenberg, usually via Twitter. The Twitter accounts of the show's creators were inundated with tweets from shippers. Rothenberg voiced his frustration with this in a February 16, 2016 tweet:

This ship war has to stop. Everyone, on both sides, please chill the fuck out. It's just a show. Watch or don't, but show respect.[4]

However, some fans pointed out the apparent hypocrisy of this move when just days earlier, Rothenberg had fanned the flames of the dispute by tweeting a TV Guide interview with Eliza Taylor, the actress who plays Clarke Griffin, entitled The 100: Eliza Taylor Weighs In on Clexa vs. Bellarke Debate. Rothenberg wrote: "I'm guessing this won't calm things down. @MisElizaJane #Clexa #Bellarke #The100"[5]

I regret this tweet already. Behind the curtain, there are no ship wars. #the100 @MisElizaJane @sadiegennis[6]

During the ship war, fans who preferred the pairing of Bellamy Blake/Clarke Griffin were sometimes accused of being homophobic or biphobic by Clarke Griffin/Lexa shippers, with truthofherdreams stating:

Biphobia and heteronormativity is saying that exact same thing in a way that make it sound like you don’t mind if Clarke is bisexual, as long as she isn’t too open and obvious about it, and as long as she goes back to being in a relationship with a guy because that’s what she’s supposed to do. “Let her be bisexual but not too much.” Homophobia is calling Clexa a “gay ship”, thus erasing all the other sexual and romantic orientations under the LGBT+ spectrum. Clarke is bi so, duh, the word “gay” doesn’t apply to her or her relationships with women. Period.[7]

I actually used to ship it but the homophobic/mostly biphobic posts I have seen from some Bellarke shippers were so disgusting. Most of them are just Bellamy stans who only care about him and his happiness and it feels like Clarke is more of a “worthy” object to them.

of course not all Bellarke shippers are like that but from the short time I was into the ship I noticed some of this stuff and especially since Clexa started happening where so many people started shitposts like “Im not homophobic but…” “Lexa is toxic for Clarke. abusive!!!!” although on tumblr I luckily havent seen the “I hate it when they turn strong female characters gay” thats a youtube/Facebook kinda comment.[8] 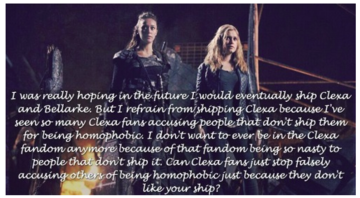 if you don't ship them people might think your homophobic when clearly that isn't the case. I don't ship Clexa and I'm not homophobic ... I just don't think they are right for each other[9]

SO BELIEVE ME WHEN I SAY MY HATRED FOR CLARKE/LEXA DOES NOT HAVE ANYTHING TO DO WITH MY NONEXISTENT HOMOPHOBIA. I JUST DONT SHIP THEM... I JUST DONT. AND JUST BECAUSE I SHIP BELLARKE MORE THAN CLEXA DOES NOT MEAN I AM HATING ON THE FACT THAT THEY ARE BI.[10]

smudged-dreams turned the notion on its head and pointed out that Clexa shippers may also be biphobic:

since Lexa’s death, I have seen the same view repeated: “Clarke becoming involved with Bellamy would be so disappointing.” This sentiment is focused on the fact that Bellamy is a man. Saying that Clarke being with a man is a bad thing because he is a man—no matter the context—is biphobic.[11]

Fans, within and outside of the Bellarke and Clexa fandoms, were disturbed by the sometimes cruel nature of the ship war. andreminyard gives an example:

I have seen both sides of this fucking ship war get absolutely nasty today. Like, to the point where people have told other people to kill themselves. These are fictional ships. You never tell someone to kill themself, and not over a fucking tv show. I’m not trivializing representation etc here, I’m just calling everyone’s attention to the utter ridiculousness of wishing someone dead because of a fucking tv show.[12]

Others felt that it was ruining the The 100 fandom overall, with asweetdeception giving this reaction:

This fandom used to be a fun place to hang out and enjoy this show and day-by-day it is becoming the biggest trash pile of toxic hate and stupidity and I, for one, am absolutely DONE with this. I want my friendly and fun fandom back where people weren’t over-reacting and overanalyzing and jumping at each other’s throats for NO FUCKING REASON. It’s gotten to the point where I can’t even go into the tags without getting my blood boiling over the absolute fuckery that this fandom has become[13]

These shipping wars have gotten completely out of control. I am not naive. I know that on any TV show, it is unavoidable to have some level of animosity between passionate fans who ship different couples, but it seems that every single article, page, form of social media, and forum the majority of conversations revolve around people arguing over their ships. For The 100, it's gotten to the point that I no longer even want to share that I ship a certain couple because I know that I will receive no end of passionate messages, many of which will be negative.[14]

Leading some fans, like clexadakru, to call for calmness and a stop to the ship war:

Please, can we all get along and enjoy the damn show? We all have different opinions… Just accept that, and let it go please.[15]

In between the fourth and fifth seasons, Reddit user allkindsofallie revisited the ongoing ship war in The 100 subreddit:

When are these ship wars going to end? I'm so tired of opening up any social media and seeing my timeline filled with hate speeches toward the opposite team. (Meaning Twitter/Instagram/Tumblr; this sub's pretty chill and the mods are great.) Let me lay some facts for you.

Just because someone dislikes a character, does not necessarily mean they are homophobic/racist/etc. Sure, there's some of those kinds of people out there, but majority of the people here are not.

Just because someone dislikes your ship does not (a) make them less of a person (b) make you any more of a person. You're people. Your insides are the same. Chill.

Can we all just calm the fuck down and love the show for what it is instead of making everything a huge argument?

Honestly it's getting tiring. This fandom can be so god damn toxic.[16]