Clarke Griffin is the lead character in The 100 series.

Clarke Griffin was a prisoner of the Ark due to helping her father try to tell the people the truth - that the Ark was dying. She has a lot of medical knowledge due to training with her mother. She was one of the 100 that landed on Earth. She eventually co-leads their group with Bellamy Blake.

After successfully defending the camp against Anya and her army of Grounders, Clarke and 47 other delinquents were taken by the Mountain Men. She escaped Mount Weather and found her way to Camp Jaha, the new settlement setup by the Ark when they came down from the sky. Clarke helped create an alliance with the Commander Lexa to fight the Mountain Men. However, the Grounders broke the alliance, forcing Clarke and Bellamy to irradiate Mount Weather. Unable to come to terms with what they did, Clarke sets off on her own.

Due to these events, grounders refer to her as Wanheda, which means Commander of Death. Three months after killing the people in Mount Weather, she was captured by Roan and brought to Polis, where she become the Skaikru's Ambassador and the lover of Lexa. After Lexa's death, Clarke escaped Polis, and began looking for Nightblood carrier Luna with the Bellamy and several others in order for the new Commander could be named. They found Luna's clan, but she refuses to become the Commander. Meanwhile, A.L.I.E. has taken over Arkadia and Polis. To stop A.L.I.E., Clarke entered the City of Light and pulled A.L.I.E.'s kill switch, but not before learning that the nuclear power plants were melting down. Clarke warns everyone about the impending nuclear apocalypse.

Clarke and the others tried to create a Nightblood serums which was revealed to give immunity to radiation. To test for the serum's success, they perform trials on subjects by exposing them to radiation, but when Emori was forced to be a subject, Clarke injected herself with Nightblood to carry out the experiment personally. After escaping to the Second Dawn Bunker, Clarke and others leave to bring back Raven from the island, but end up running out of time. Their group decided to use a rocket to go to space. Unfortunately, Clarke was left behind in order to save her friends and suffered severe radiation poison. However, she survived because of her Nightblood. 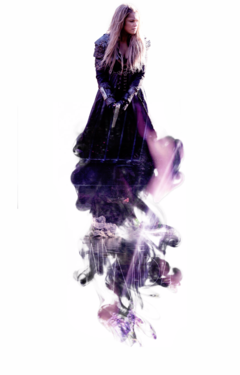 Clarke as Wanheda, fan edit by brittania_, that was retweeted by the showrunner[1]

In Season 2, The 100 fandom seemed to explode after Clarke's and Lexa's onscreen kiss[2], canonizing the fact that Clarke is a bisexual character - the first character revealed to be one in the series. Jason Rothenberg confirmed on Twitter that Clarke is bisexual, but that the characters in the 100 do not label themselves and don't worry about such things because they are more worried about "spears to the chest"[3].