You might be looking for The Authority comic book series. 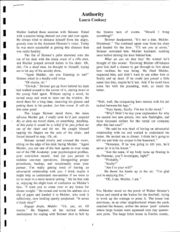 first page of this story in an unknown zine

Printed in an Unknown Zine

At some point (likely the early to mid 2000s) this story was printed in an unknown zine, along with Paybacks, and other fic. It is unknown if this was with or without permission. In the author's notes on the first online posting of it, as long as the header was attached and no fee was charged, the fic could be "distributed freely."

Since I got some new flame-retardant knickers for Christmas, I thought I'd post this little gem. I've gotten a lot of encouragement (you know who you are!) so I'm hopeful that others will like it, even if it isn't everyone's cup of tea.

Big time NC-17 warning on this one! You've got your male/male sex, your power trips -- YOU HAVE BEEN WARNED! I'm not responsible if this story freaks you out or pisses you off. So there!

All X-Files characters (c) Ten-Thirteen, Chris Carter, and 20th Century Fox, and used without permission. No copyright infringement is intended.

This story may be distributed freely, so long as no fee is charged and this header is preserved.

The author welcomes comments at her e-mail address. Flames will collected and used to start fires, appropriately enough.[3]

I loved "Authority" -- definitely not as harsh as most of the s&m XF stories out there. Some nice, hot sex scenes, too. What I enjoyed about it was the progression of the character's reactions. Skinner's assertion of authority was more palatable to me because *we* know he doesn't intend to harm Mulder, but Mulder doesn't know that. And then the way Mulder starts liking it... I thought it was handled well, and I'd love to read more like this. Dare I hope for a sequel or 2 (or 3)? [4]

Laura - I'm new to "on-line" so I just checked into this newsgroup a few days ago. I read "Authority" and want to tell you what I think, Okay?

In my wasted youth (and I do mean wasted - about 18-20 years ago, in college), I read several "hot" stories like this:(we called 'em "slash stories") K/S (kirk/spock), K/S/M (figure it out!), S/H (starsky & hutch) and, God help me, a few really obscure H/J (harry & johnny - thats dirty harry and johnny, the beautiful rookie cop played by david soul in the first DH movie.) Ever hear of any of these?

Anyway, I read "Authority" with no small amount of background knowledge. I have to tell you though, as well written and entertaining as this was, well, dammit - it just kind of gave me the willies! I mean, my sweet Mulder and that PIG *SKINNER*?! I guess I would rather see Mulder a little less - oh, I don't know - WHIPPED!

And, if the truth be told - ! see him more with a fiesty, argumentative red head.[5]

I'll own that I kept copies of Office Discipline and "Authority" and In The Shadows for under-the-bed reading. They were all wildly fantasized which may be one reason they repelled me less. There was never any pretense that rape and love are similar or the same. Office Discipline always coasted along the line and, to my mind, never went over it. There were always options. Authority and ITS don't have that outlet and I'll own to being a bit troubled by them at the same time as I found them hot.

But they were also grossly fantasized, unrealistic in any sense I could identify with, and that makes it a lot more about just hitting autonomic buttons and less about selling an image. You're seldom going to see some guy's boss put him in bondage on the floor as payback for interoffice politics. Date rape should seem as unlikely as Authority's slash scene, but most of the women I have met in any capacity have had at least a brush with date rape.[6]

Laura Cooksey's "Authority" is still one of my very favorites. Mulder/Skinner -lots of angst- whole new side of Skinner, well-plotted D's by someone who knows what they're writing about. This was my "revelation" story into the word of X-files slash fiction - (I was previously solely a Garak/Bashir girl) and the very first story I read on the MSSS on simplenet.[7]

It was the piece that introduced me to Mulder/Skinner... and it's always hard to forget your first time <g> [8]