The term audiofic refers to a story that is created by taking audio recordings of dialogue from an existing source, such as show or film, and rearranging and altering it in a way that tells a new tale. So far there is no commonly accepted fannish term for this kind of fanwork. Audio engineers refer to it as a razortape.

Some of the earliest examples of audiofics predate 1985. From a memorial to M.L. Steve Barnes, a fan remembers:

"It was just another of those dirty jokes that we all laughed about when [Steve] put together an x-rated tape using recorded bits of voices from all the tapes she had made of Star Trek episodes. It was so funny you laughed until your sides hurt, and it was hard to breathe... When Maureen Wilson, the president of Gene Roddenberry's fan club told the Great Bird of the Galaxy about it, he wanted to hear the tape. When Maureen asked Stevie if she would send the tape to her to pass on to GR, Stevie was torn between wanting him to hear the tape and afraid he might disapprove. She had stars in her eyes when she showed us the personal letter he wrote to her expressing to her his enjoyment of the tape, and his appreciation of the fact that she did it only with her tape recorder, having no access to any kind of sound equipment." [1]

In the days before audio recording and editing software was easily available, older online fandoms sometimes created the audio equivalent of an X-rated narrative with no plot by taking clips from fannish sound archives and editing them in a new way. In the late 90s, when all file names had to have eight characters plus a three-character extension, the file names of these audio stories often ended with "sex" (such as jbsex.wav, bfrksex.wav or OPMAGSEX.WAV). .wav was the audio format of the file. Usually a sex.wav was a minute or so of edited dialogue, grunts, and sexually suggestive phrases that told a simple and explicit story.

One archivist who hosts a small collection of Transformers and Star Trek audio PWPs called these files smut sounds on a page that can be traced back to at least 2000 via Wayback.[2] 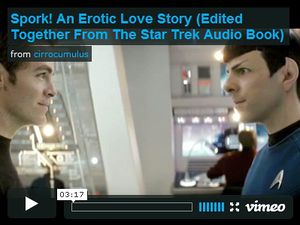 More sophisticated and/or more recent audio fics are often equally slashy in nature but they sometimes tell more complex stories. Star Trek: The Lost Episode (1997 or before), also called The Lost Gay Episode[3] is easily available on the net and might or might not be fannish in origin, but it tells the tale of forbidden feelings and a sexual encounter between Kirk and Spock.

Another so-called "missing scene" is Zoetrope's Missing Episode of SGA! from 2005 which she summarizes as: "Lost and alone on an alien jungle planet, Rodney is missing, presumed dead. John, however, refuses to give up the search. The ep[isode] the network will never show - Sheppard finally admits his forbidden love for McKay."[4] Zoetrope's multimedia SGA project Missed the Saturday Dance from 2006 includes two audio fic trailers, which (it could be argued) are another form of fiction created in an audio format.

Zoetrope called her missing episode audio!fic[4] and another SGA example by moonmip & dulthar was referred to as audio fic in June 2007:

This is an audio fic: we've created a story by taking dialogue from the show Stargate Atlantis and reworking these speech snippets into a naughty tale. It is NOT a podcast. It's more in the nature of an experiment with a new medium (for us).[6]

Isis refers later in 2007 to her Ray/Ray collage of podcast-like spoken text and edited audio clips as an aud or fanaud:

[Er, an aud being the equivalent of a vid - bits of the source taken out of context and strung together - except audio rather than video. If there's a real name for this, I dunno what it is.][7]

This is a "fanaud" (by analogy with "fanvid") constructed by taking snippets of episode dialogue and arranging them in a new context to tell a story."[8]

Jinjurly, referencing Isis, used the term audfic in 2008 to describe audiofics and fic trailers such as the mentioned SGA and due South stories[9] while Ferntree described her Life on Mars fanwork Shot in 2009 independently as audiofic:

I'm not sure what to tag this as... but seeing as it's both fictional and audio, I'm going with audiofic lol.[10]

Despite different names, the general idea is still the same. Whether Vecchio and Kowalski have an encounter in a sleazy bar or John admits his feelings for Rodney before doing naughty things, the audio fics of today aren't that far removed from the early sex.wavs and most examples show a strong connection to slash fandom.