Missed the Saturday Dance (MtSD) is a McKay/Sheppard World War II AU in Stargate Atlantis fandom, created by Zoetrope. It's told in parallel storylines -- one set during WWII, and one set in present-day.

MtSD can be understood as a multimedia installation[1], in the sense that it consciously or theatrically plays to the viewer in its scene setting, that it is immersive or universe creating. It literalises the AU in a similar way to documentation fic like the popslash story Flesh Mechanic[2]. It's possibly the first fanfic story/piece of fanart to incorporate so many different mediums; it included a video trailer and two audio trailers that set the tone and mood of the whole piece, and a written story that was told partly in images. The video trailer included WWII footage and footage from other roles played by the actors who portray John Sheppard and Rodney McKay; likewise, the audio footage wove together radio broadcasts from WWII with audio from Stargate Atlantis episodes, recontextualizing the show's dialogue.

Zoetrope herself described the piece as fic when she published it.[3]

It was the first fandom-specific project to be preserved by the Open Doors project.[4] 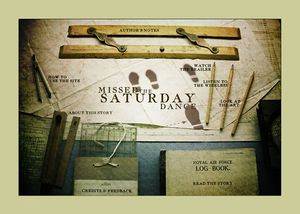 Intro page of Missed the Saturday Dance. The text links to other parts of the multimedia installation.

MtSD, though massively popular[5], sparked debate. Rec'd on the day it was released [6] by Astolat, it was soon talked about all over LJ SGA fandom. When Speranza rec'd it[7] later that day, some comments expressed dismay at the privileging of visual storytelling over text. In a follow-up post[8] Speranza argued that MtSD, and the technological environment in which it was created, represented a paradigm shift in the way stories could be told in fandom. Some people disagreed, citing audio slash, fancomics, and documentation!fic as earlier multimedia installations [9], but others argued that no previous work had realised its universe so comprehensively[10].

Other fans were concerned about the fact that the multi-media piece was less accessible to fans who use assistive technology to navigate the internet, in particular that the letters were presented as graphics only, with no text alternative.[11]

...an extraordinary piece of multimedia from zoetrope. It's AU SGA, period John/Rodney, in which Rodney is designing WWII bombers in England and John is a test pilot. Love and danger ensues, all in the frame work of letters sent years later from Jeannie's family trying to finally find Rodney. It's beautiful like an old movie. The story really could have stood alone; the images (some from period movies that JF and DH have done, marvelously), embellishments, video and sound are really, really good gravy. Missed the Saturday Dance. You don't have to be a John/Rodney or SGA fan to appreciate this one. Slash, but fairly worksafe. [12]