Attack on Titan or Shingeki no Kyojin (進撃の巨人) is a Japanese manga series written and illustrated by Hajime Isayama. It has been serialized monthly in Kodansha's Bessatsu Shonen Magazine since September 9, 2009. It is published in English by Kodansha Comics USA, as well as serialized online by Crunchyroll Manga. Attack on Titan was adapted into an anime by Wit Studio, with the first season airing in 2013. A second season has been announced for 2017. Several spin-off properties and other adaptation also exist, including other manga and anime, OVAs, light novels, video games, and live-action films.

The series is an international commercial success, with 60 million copies of manga in print as of September 2016. The first season of the anime boosted the series' popularity worldwide, receiving much critical acclaim. However, the series has also drawn some controversy, particularly among some of Japan's neighboring countries, due to its themes and the mangaka's personal views.

Attack on Titan is set in an alternate world that is dominated by massive, man-eating humanoid creatures known as Titans. Humanity survives by living within a set of three walls tall enough to keep the Titans out. The walls are Wall Maria, Wall Rose, and then Wall Sina. However, at the start of the series, a Colossal Titan of a size never seen before destroys the wall of a border district known as Shiganshina. Several other Titans pour in and wreck havoc, including an Armored Titan that takes down the outermost of the three walls, Wall Maria. The surviving citizens of Wall Maria evacuate into the second wall's zone, Wall Rose.

The story focuses Eren Yeager, his adopted sister Mikasa Ackerman, and their friend Armin Arlert, who lived in Shiganshina and survived the destruction. Facing the death of his mother and the disappearance of his father, Eren vows to get revenge on the Titans by joining the Survey Corps, a military branch devoted to venturing out into Titan territory in an attempt to reclaim the land. These soldiers utilize a tethering system called vertical maneuvering equipment (or 3D maneuvering gear) to jump from structure to structure and strike the Titans at their one known weak point—the back of the neck.

Over the course of the series, the characters face Titans and other enemies, attempt to take back lost land, and grapple with mysteries such as the origin of the Titans, the mysterious appearance of the Colossal and Armored Titans, and the strange clue Eren's father gave him about the basement of his childhood home.

Note that most of the characters have multiple alternate translations and spellings of their names.

Fanart (including doujinshi), fanvids, and fanfiction are all common fanworks. As September 2016, there are over 30,000 Attack on Titan fanworks archived on Archive of Our Own. Cosplay is also very popular, particularly the series' military uniform and the most famous Titans.

The fandom exploded in size and activity with the release of the anime's first season, drawing in many viewers who had previously not heard of the manga. Since the anime does not completely adapt the manga's story, many viewers follow the manga after finishing the anime, while others decided to wait for the second season to come out. Because of this, there is an attempt to avoiding spoiling non-manga-readers. However, it is difficult to interact in the fandom fully without being spoiled.

Most of the fandom is focused on shipping. The most popular ships are M/M. However, there are also some reasonably popular F/F ships and M/F ships thanks to a fairly large cast of well-developed female characters. Shipping wars can become vicious, particularly between fans of Levi/Eren Yeager and Levi/Erwin Smith. Furthermore, there is tension between fans who support ships involving characters who are underage according to Western standards and fans who believe this is problematic and even immoral. Since in-universe characters as young as 15 can become active military members, whether or not they are truly underaged is a common debate.

Since at least 2010, fans have been aware that the mangaka, Isayama Hajime, holds views that are widely considered nationalist, imperialist, and fascist. These mainly relate to his views on the Japanese Empire's actions during World War 2. Isayama has been open about supporting the Axis Powers of WWII. Several military characters in the manga are based on real members of the Axis Powers' military – some of them war criminals. A social media account that made statements dismissing Japan's imperialism was connected to Isayama. See The Possible Disturbing Dissonance Between Hajime Isayama’s Beliefs and Attack on Titan’s Themes, written in 2013, for an overview. This caused controversy surrounding the series in Asia, particularly South Korea and China. However, around 2013 and throughout the peak popularity of the anime, Western fans largely ignored Isayama's views, choosing to separate the story from the creator. Many said they were able to do so because Attack on Titan's themes seem to contradict Isayama's views: the story presents a morally gray world, in which the military and government are corrupt, war is futile and horrific, and the definitions of good and evil become increasingly unclear.

However, fans' willingness and ability to ignore Isayama's views shifted as Attack on Titan's plot began to seem increasingly influenced by imperialism and fascism. 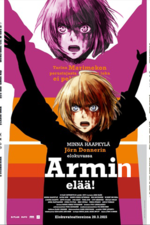 "Armin elää!" (Armin lives!), a punny edit of the movie poster of Jörn Donner's film "Armi elää!". Made by sinceretic.

In 2013, the tag "Jättiläisii turpaan" was started on Tumblr. It is a colloquial expression for "punching giants in the face". Around this tag started forming a Finnicized version of the AoT universe, filled with puns and other language jokes. Artists started making art and comics depicting the different characters speaking in different dialects of Finnish, although different creators could assign different dialects for the characters.[1][2] This also included referring to the characters with closely resembing Finnish names, for example calling Jean "Janne", Eren "Erno", Hange "Hanski", Ackerman "Akkamies", etc.[3] A fandub based on the ideas of Jättiläisii turpaan was started on Tumblr and Youtube. This group created joke dubs and covers, as well as meme images in the spirit of the tag.

Other people have created their fandubs and meme videos on Youtube as well. Youtuber Rindou created an anime convention anthem "Conilaulu ;_;", singing about the difficulties of creating a cosplay on time and surviving through a convention to the tune of the first Attack on Titan opening. A common pun was Levi's name;[4] one reason for this being that "Levi" is also a place in Finland. This would prompt people to make jokes about news headlines including the name.[5]

Armin was convinced that it was the opportunity of a lifetime, but Eren just saw it as just another chance to fail. Nothing good could possibly come out of an internship in a stuffy office at Survey Corporation. Eren would have been content to sit and watch the remainder of his senior year pass him by. However, after one elevator trip, Eren finds himself questioning everything he thought he knew about life and himself.

Before cell phones. Before the Kardashians. Before internet porn. The year is 1994. Eren, Mikasa, and Armin, poor kids from the wrong side of the tracks, have been transferred with the rest of their neighborhood to the posh, uptown Trost High (Home of the Titans). Mikasa and Armin seem to fit in well enough, but Eren isn't quite so lucky. Of course, most of this has to do with Eren's personality. When he accepts a bet to lose his virginity (and actually prove that someone likes him) by the end of the semester, it's hard for him to deny the improbability of winning. After all, the only one he seems to be talking to these days is the weirdly pretty (and just plain weird) goth working at the donut shop down the street...

Just another cliche AU in which Eren works as a barista in his mother’s café, specializing in latte art. And then there’s Levi, who’s not exactly your typical patron, because, well, he’s blunt and rude (which Eren supposes isn’t that much different from regular customers) but mostly he just confuses Eren’s poor little homosexual heart.

Eren hates being an omega and is determined to defy his orientation and join the Survey Corps. When a Colossal Titan mysteriously appears and breaks down the outer wall of his district, he and his friends are forced to retreat to one of the inner walls where practices are very different from what he'd grown accustomed to. They are shocked and terrified at the treatment they receive from the military personnel once they arrive on the other side of Wall Rose. With every bit of his humanity and dignity stripped away, Eren's world is turned upside down. Can Eren still be the hero he always wished to be while trying to deal with the changes occurring within himself?