Levi/Erwin Smith is a popular pairing for Levi and Erwin Smith in the Attack on Titan fandom.

The Attack on Titan side story, Attack on Titan: No Regrets, focuses on Levi's origins, revealing that he was part of a band of thieves using the Vertical Maneuvering Equipment to commit crimes before he is scouted by Erwin to join the army. It is shown that Levi once intended to kill Erwin to gain citizenship on the surface. However, Levi later chose to instead follow Erwin and work with him to serve humanity. Over time Erwin earned Levi's trust and subservience.

Their ship name, EruRi, is a Japanese portmanteau. The Commander/Captain dynamic is an aspect of the ship's appeal.

Many fans have noticed that the relationship between Erwin and Levi is unique, based on deep trust and respect. Also, they have a longer history together so they have a strong personal bond. Levi did always follow Erwin around, especially in the anime (like in season 1, episode 22) and after Erwin’s death he did claim that it was his personal feelings which led to his decision. 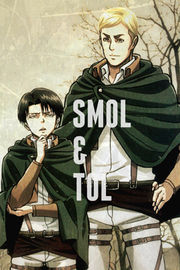 Erwin is the Big Guy, Levi is the Little Guy

Big Guy, Little Guy: Any relationship involving Levi typically has some aspects involving his short stature. In one of Isayama's interviews he was asked about Levi's preferred type of person and answered: "A type of woman he likes? Since he’s short, small people tends to like tall people… I guess he might like tall people.” Since Erwin was one of the tallest in the series it is probable that Levi took a liking toward Erwin. This relates to the Height Rule.

There was a shipping war between fans of two Levi Ackerman ships: Levi/Eren Yeager and Levi/Erwin Smith. An aspect of the ship war is that Eren/Levi is a ship involving a teenage boy with a man over twice his age. Levi/Erwin is argued as an alternative.

Levi/Erwin Smith is the third most tagged ship in the Attack on Titan works on AO3.[1]