'Neath the Sidewalks of New York

'Neath the Sidewalks of New York is a het crossover Beauty and the Beast zine. The first issue is an anthology and the second issue is a novel.

From the flyer for the first issue: "NSONY is a fanzine for people who find impossible situations romantic - and wish to resolve them. This zine touches upon mature themes but is rated PG13." 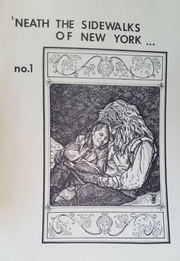 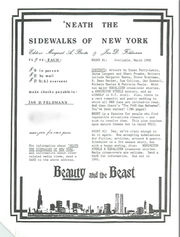 a flyer for issue #1 -- "With two major EQUALIZER cross-over stories, a REMINGTON STEELE mystery, and an AIRWOLF in N.Y. story. Also, there is a very romantic and poetic wedding to which all B&B fans are invited-to read. And then there's "The PAWS that Refreshes". You've been warned!"

Includes two B&B/Equalizer crossover stories by Basta. In the first ("In the Dark Hour"), Robert McCall is Catherine's lover before Vincent first visited her balcony. In the second ("McCall of the Wild"), McCall encounters Vincent on a case. Another story is "Come--Dare the Silver Mirror" by R. Dean Becker, a sensual followup to the Trilogy (probable source of the R rating) and prelude to the Tales from the Tapestry zines. Also includes a Remington Steele crossover story by Basta.[1]

This zine is packed full of action-adventure stories that bring other favorite TVcharacters into the world of B&B. Crossovers include The Equalizer (2), Airwolf and Remington Steele. Can you imagine Remington as the 3rd brother? Yup - Vincent, Devin, and Remington grew up in the Tunnels together! All stories work very well. Elliot Burch is featured in one.[2] 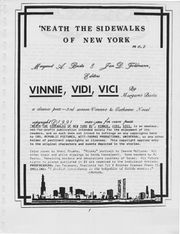 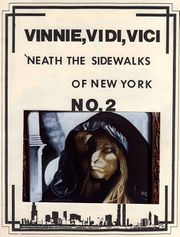 cover of issue #2, Sheri Pruehs. The cover is printed on heavy card stock with a photo of the color art pasted to the front

'Neath the Sidewalks of New York 2 is subtitled, "Vinnie, Vidi, Vici." It is a novel by Margaret Basta and Jan D. Feldmann. It was published in 1991 and contains 188 pages.

The art is by Gerda Eeckelaert and Jeanne McClure. According to the Qfer the cover is an "applied color picture" and the zine "contains sparse art by Gerda Eackelaert."

According to The Beauty and the Beast Buyer's Guide to Fanzines:

There was to be a third issue, one that never came to fruition. Its flyer stated: "Caermyrddin," "Joyous Gard" and "Annwfn," three novellas that are a continuation of #2, by Margaret A Basta. Each deals with different aspects of romantic relationships while a panorama unfolds with the mysteries of the past helping to bring to fruition the promises of the future.

My how swiftly time passes between editorials. My family has little doubt about my insanity. They've always considered fandom an illness from which I'd one day recover. Well, this patient is not trying to cure herself, in spite of some of the problems of the past year. For there was Tunnelcon - a wonderful, emotional peak, which fandom needed for it reaffirmed my belief that someday B&B fandom can become as great as the STAR TREK fandom. Keep aiming for that, you die-hards, wounded and 'who cares?' folks out there. In unity there is strength, and this is not a cliche.

Some of you that have already read #1 may notice a few differences in this issue. We've got a great new printer. Hopefully you'll find our new type face quite readable. It is a reduced font in comparison to #1 . You are actually holding almost 265 pages of normal 10 font type compared to this special font. Even though we did reduce the print, you'll notice that we didn't actually reduce the size of the zine. We are within a few pages of the number for #1. For the vision impaired, we do offer a large print xerox special order edition for an additional $5 above the base cost. Oh, the joys of a new word processor versus a ten-year-old-typewriter...

If you've read #1, you'll be familiar with a few of the characters that are central to this novel. To the fans of these 'worlds', please forgive me for my altered depiction of your main men. As you may have guessed by now, there are some cross-over elements to this novel, but if you are unfamiliar with these universes, don't panic. Throughout the novel, even if you don't recognize the names, it won't make a difference in the plot. And if you get of the really obscure inside jokes and references, the more the better. Be prepared for a bit or 'punishment. If you've read #1 then you know that there are no depths Below to which I will not plummet.

A summation: At the Catherine returns Above after her slashing. In the turmoil of these months , she meets a sympathetic soul , a resigned C.I.A. agent, Robert who understands her torments. He guides her to peace, and eventually to a job in the D.A.'s office. Then she meets Vincent again, and the 'Equalizer' becomes a dear friend instead of lover.

McCall of the Wilde: Robert is trying to save the life of a nun who witnessed a murder. Trapped in an alley, their lives are saved by a roaring Vincent, on his way home from a late night with Catherine. Thinking that Vincent is the enemy, Kostmayer and Control who are friends of Robert, attack Vincent and capture him. When Vincent regains consciousness he's in a safe house cell about to be shipped to the Company's labs. Vincent engages in a battle of moral wits with Robert to convince to release him. Eventually Robert does this, but still worries about the enigma that is Vincent. realizes that Vincent knows Catherine, and confronts them in her apartment. A friendship is formed , and Robert takes the first step towards becoming a Helper. As for "The Stainless Steele Tunnel Brat", well , I hope to have it in #3 . I must admit that when I realized that I'd already written almost four hundred pages of "VVV" I didn't have space for all of it in #2 much less this sequel. It will get published - I promise, fen. One final note: I consider this novel to be classic B&B in spite of the fact that it is post-3rd season. Actually, I feel that this novel and the one to come are the spawn of the famous trilogy. Both are novels that I felt compelled to write because of plot directions that were suggested in the trilogy but never brought to fruition. I hope that you will want to read more of my version

of Below. And then there's the matter of good taste - do you, as the reader, want steamier love scenes? Or, is my writing in this novel at an acceptable level? Do you prefer 'adult' zines? I wouldn't mind writing more passionate scenes. So write and tell me what you'd favor.

A 4th season SND B&B/Equalizer crossover novel. A dramatization of the Catherine-in-the-witness-protection-program scenario, involving (besides the Equalizer crew) Vinnie Terranova of Wiseguy, Elliot and others. McCall has a ring (like Gabriel's), Vincent and Diana have become lovers before Catherine's return, and Catherine has amnesia.[3]

Unlike Volume I, this zine is one novel-length story. The Equalizer appears again to help resolve the events of the 3rd season and more. Although Catherine returns, readers should be aware that Vincent, frustrated by his erotic dreams of Catherine, has entered into a sexual relationship with Diana before Catherine is found. Catherine, suffering from amnesia and working as a waitress in a small town, is also having an affair. Now a delivery man, Bitot stops at the diner and sees Catherine and tries to watch over her. The Equalizer and Diana discover her while pursuing another case. Catherine is brought back to the Tunnels but, having no memory of Vincent, she fears him. Her rejection sends Vincent back to Diana for comfort. This is an ambitious story with many twists and sub-plots before all conflict is resolved. Diana, Joe, Elliot, Jenny, Jamie, Robert McCall and Vinnie Terranova (Wiseguy) are all featured prominently in this story.[4]