"City" is a gen Star Trek: TOS fiction anthology edited by Helen McCarthy. It was A4 size.

This 'zine is produced by a group of Star Trek and sf fans in the London area. The first issue is intended to give as wide a cross-section as possible of the kind of writing of which ST fandom is capable: for future issues, contributions are invited. Fact or fiction, humour, personal viewpoints on anything at all, and letters of comment -- especially letters of comment -- are welcome. All contributors are promised rapid publication or rapid return of material with an explanatory, and hopefully constructive, letter of rejection.

"City" 2 was published in 1976 and contains 32 pages. The art is by Helen McCarthy and Sue Toher.

The page numbering below is a best estimate, as the pages themselves are not numbered. 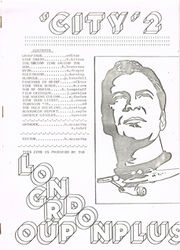 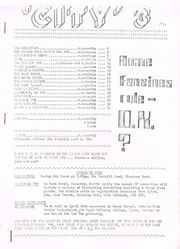 At the last Globe I went to a curious thing happened; this funny little woman came up and sold me a fanzine. 30p. Lots of money especially for a Star Trek fanzine. Now I’m not so crazy as I sound because it so happens the producer of that fanzine is one Helen McCarthy who works in the same building as I do and who walks right past me in the corridor occasionally. So altogether it was as good an opportunity as any to check out this curious sub-fandom. And curious is just about the right word too. Similar enough to a ‘real’ fanzine to lull one into a sense of false familiarity, some huge culture-gaps soon open up. Not so much the mere fascination with Star Trek—which as far as I’m concerned is not much crazier than any fascination with SF anyway—or even the ST fiction, crosswords, and all the rest.

No, what rocked me back was the peculiar glittery innocence of it all, a sort of Rowesque community bathed in light and friendship where everyone helps everyone else off and on with their Fancy-Dress and oohs and ahhs at the appropriate times at the Fashion Shows at ST cons, and gives an ovation for the hard-working organisers at the end, and generally all is sweetness and light. No one gets drunk, falls over, feels anyone else up, or feels shitty. 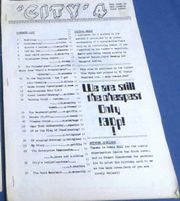