Contact is a Star Trek: TOS fanzine published in the UK by the Empathy Star Trek Club of Yorkshire, England. The club also published a clubzine Emanon in the mid-1970s. At least four issues were printed.

Some of the content from this anthology series was published in Deja-Vu.

"Conflict" and Tell It to Who?" are good, either written by Lenora, Sei-Anj Khey or Persephone! "Conflict" tells of Spock's decision to join Starfleet and how he breaks it to his parents. "Tell It to Who?" is a short statement from Kirk made under duress from the Klingons. It has a nice little twist at the end. [1]

CONTACT is... strong on the light touch in stories and poems. Spectre makes two especially splendid contributions, "Candy's Dandy... but Liquor's Quicker," which explores Kirk's delirious fantasies, and "Spock around the Clock." Sei Aiy Khey's "Diabolgoical" presents an entirely Spock's solution to the problem of prostitution, and the same author gives another version of what happens when you spike a Vulcan's drink in "A Matter of Taste." [2] 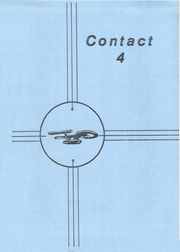 I enjoyed "Lost and Found" by Valerie Piacentini, where Spock is apparently killed by Klingons and replaced. The story is written through the eyes of the new First Officer. Also living up to Star Trek's image is "Gaoler" by Thetis. In this tale, the big three are captured as warlocks and condemned to die. A young female gaoler observes their obvious caring for one another and decides to help them get free. [3]