The Fair Treks: Star Trek's view of women is an essay by Sam Armitage, printed in "City" #3. 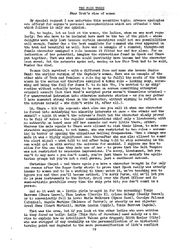 So, to begin, let us look at the women, the ladies, whom we saw most regularly. Two who have to be included here must be the two of the pilot - whose delights were only lost because certain executives could not see possibilities well enough. Number One - the best candidate for command who ever appeared on the trek and beautiful as well. Here was en example of a rounded, thought-out female character assigned a role because it fitted her and her alone. For an indication of her potential, imagine the attractions found in Spock and Uhura put together. That was what she would inevitably have become had the character been Saved. But the networks spoke and, seeing as how Star Trek had to be sold, Number One died. Yeoman Colt survived - with a different face and name she became Janice Rand: the earlier version of the Captain's woman. Here was an example of the other side of Trek and females: a role dug up to fulfill the needs of the token woman in the series and therefore assigned a token role - looking sexy, screaming and being the foil for James T. to do his 'No, I'm married to my ship' routine without actually having to be seen on screen committing attempted criminal assault (not that Rand's scripted parts weren't themselves criminal - for unwarranted intrusion into otherwise moderate stories - as you may gather I have somewhat strong views on the character, without wishing to reflect on the actress herself - she didn't write it, after all.).

Lt. Uhura - AKA the cop-out: what else can you call it when one character is forced into satisfying two minority interests at once - the ethnic and the sexual? - again it wasn't the actress's fault but the character slowly proved to be full of holes - the regular communications chief only a lieutenant; with no authority on board once off her console and very little there, either. Whereas the male equals to Uhura were allowed to risk their lives, to make constructive suggestions, to act human, she was restricted to two roles - screaming in terror or opening the ubiquitous hailing frequencies. When a change was made it was a highly significant one: thereafter she was also allowed to sound the alert signal - when told to and after being told to stop screaming as the men would get on with saving the universe for mankind. I suppose one has to allow for the one time they made use of her - to prove that the Salt Vampire was not restricted to Caucasian impressions. I'm sorry, Lieutenant, but you can't do any more - you don't count, you're just there to satisfy the egalitarian groups but you're not a real person, just a cardboard cut-out. Christine Chapel - and there again you have a character brought in for only one reason after the Roger Corby story: to prove that Spock really was utterly immune to women and to be a warning to them: watch it, we're teaching men to ignore you and then you'll become extinct. I'm sorry Nurse, all we'll let you do is pass instruments to the Doctor, drool over the First Officer and do semi-artistic pratfalls every time the ship gets hit; you don't count as a person.

That was the crew, but if you look at the other ladies who were written in they fared as badly: Leila (This Side of Paradise) used solely as a device to explain how an intelligent Vulcan gets drugged; Edith Keeler (City) who was stripped of any credulity as the personification of an historical turning point and degraded to the mere personification of Kirk's conflict with a past and a future both alien to him and no present open to him; Zara-beth (All Our Yesterdays) who wasn't needed in order to show Spock's regression from Logic.

Of course, sometimes the female was used a a plot device - a disguised alien: Nancy in 'Mantrap'; a lunatic who trips Kirk up: Marta in 'Whom Gods Destroy'; another lunatic: Janice Lester in "Captain Kirk, Space Queen"; or as a simple sex object for fighting over (by the men, of course) - Reena (the innocent); T'Prlng (the far-from); Eleen (the devious); Nona (likewise); Miri (the lolita); Amanda - but here not bodily but on the level of loyalty. And then again as examples of brainlessness: the Romulan Commander, tricked and double tricked; Mudd's Women, enslaved to Enterprise's Henry Gomdorf; Shana, bled of information on Triskelion; Mara, persuaded that Federationers are nice people whilst a raping Ensign stalks the ship; Odona, conned into suicide by a determined father and a Captain who wants to avoid a life sentence on Gideon helping to solve the planet's problem.

Occasionally the scriptwriters did more than say "Let's write a girl in there and do unspeakable things to her". They created characters who were intended to be female, T'Pau leaps to mind. Vulcan's matriarch ... who was cast as lacking the sense to think up a way of diverting the obviously underhand plans of T'Pring. On the other hand, she did have style, individuality and a visible mind of her own.

There was Marlena who, though essentially a mere sex object, was given a role as the person in the mirror universe most likely to spot the altered Kirk and also shallow enough to react visibly ... she provided key linking sequences to tell the audience what life was like in the Empire and yet the interplay with Kirk was, by the Captain's unease in his assumed role, kept low-key.

Then there was Gem - acted beautifully: how easy it is to play a mute in a role which demands intense reaction, which must therefore be done totally through expression. The character also showed signs of having been thought out - intensely innocent, to hold the attention despite what was happening to the stars, compellingly beautiful in an elfin way, without looking twee or false, and above all easily an object of self-indentification for viewers who wanted to react to the stars but in an aspetic [sic] situation. She was trapped in her fate and we watched for a resolution.

Possibly in the same class fell the Castor and Pollux duo in 'The Cloud flinders': Vanna, the trog, fighting for her life, her people's health and rights in the mine, exercising the authority of force to get her end (until Jimmy T. decided that enough is enough and with one mighty con disarms her); and Droxine - all right: the lovely Droxine (mainly a tag devised by MCPery to tip each other off that lie. Theiss has been up to it again) - the aristo on Cloud Nine who has never seen a Vulcan before (nor he a work of art) and who speaks for us the words of the ordinary, non-depraved aristo to balance Plasus' extreme position.

The character roles - grotesques, tumblers and the like - seemed to come out better. Here women were used for their qualities rather then just their sex - Tonoon who, in Gamesters, was used as the alternative to Kirk's Shana to show Chekov that even in slavery RHIP; Roberta Lincoln as the archetype dumb blonde secretary, watching two policemen dematerialise and reappear and yet still being totally disinterested in the vast computer on the par wall; Zora in 'Savage Curtain' who had little to do except one fist fight and a series of establishing shots showing her looking incredibly villainous and evil; Stella Mudd with her typecast vocabulary ringing through her every scene to slowly and fatalistically draw the viewer to a readiness for the final joke.

All of this leads to the question: is this how women are in real life?

The answer is resoundingly in the negative.

Do we, therefore, wish to condone this sort of misrepresentation - which is carried through into other, similar programmes? To point out but one example: in UFO the format allotted the vital role of Moonbase operational ground staff to girls. By Space 1999, excepting the two token female leads, women are again used only where the plot demands and then in limited roles intended to straitjacket them into insignificance - where are the female Eagle pilots, for one thing?

For its period and environment Star Trek made a brave effort - one brave effort ... in the pilot ... after that it regressed, with occasional rebellious spurts (Lt. Uhura being allowed shore leave without being required to be menaced by an alien creature), into format token-female-casting-only.

What has to be said is that as things stand at present there is every likelihood that over the next decade women will play an ever increasing role in science and technology. At present the views of the future steadfastly refuse to consider such a situation and choose to make their future a male-order domain. Is it any wonder that more and more of our girls are writing their own fiction, in which women are the masters and men their slaves, or else writing stories of Utopian futures where the two sexes co-operate?

Star Trek paved the way for others to follow - but that road was manifestly built flawed and it needs resurfacing - we need to look to a day when Captain Kirk will take his orders from a female Admiral, will put up with the idio-syncracies [sic] of a female Chief Engineer and will find consistently that his First Officer loses 3D chess matches to the glamorous yeoman purely because she is a better player (Chief Nurses please note: is this your cue?).