You can break my soul ... but for the love of God don't touch them. 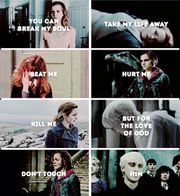 Dramione example, posted by ⚡️Felton△⃒⃘Family⚡️ in 2014[1]

You can break my soul, take my life away, beat me, hurt me, kill me, but for the love of God don't touch them. is a meme that on Tumblr and Twitter as a Picspam/Gif set of seven scenes of a one character and the eighth scene is of another character that that first character (canonically or not) loves.

The images are labeled as:

Them above is often interchangeable to him or her, depending if the second character is a male or female.

Also added on the post is the [insp.] which is usually linked to the previous post that inspired the artist.

It was originally created as a simple text image by Tumblr user beniignus (then diggadiggory), in a headcanon post on the roleplay blog. [2]

Once Upon a Time