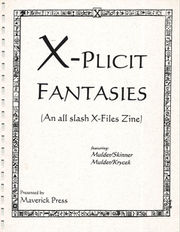 X-Plicit Fantasies 1 won a STIFfie as the best X-Files zine of 1997. It contains 162 pages. Limericks by Kamala Roberts and poetry by Gwendolen. Art by Randym. The pairings are Mulder/Krycek and Mulder/Skinner.

One of the art pieces by Randym was nominated for a STIFfie.

See reactions and reviews for Secret. 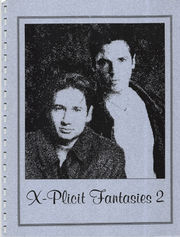 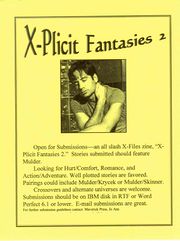 X-Plicit Fantasies 2 was published in 1998 and contains 176 pages. Limericks from Kamala Roberts and SpookyH. Captioned photos by Kal Romine. All art is by Randym.

[Guardian]: ...a fascinating start that settles down into a tale of betrayal and deception, but manages a slightly 'shaky' romance as well.[1] 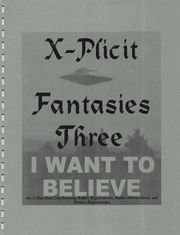 X-Plicit Fantasies 3 was published in 1999 and is 158 pages long. The zine has only black and white screenshots and publicity photos as interior illustration. 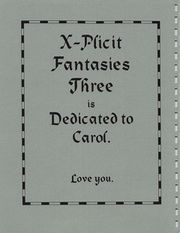 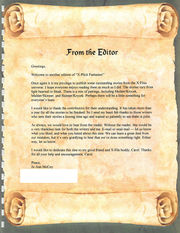 Welcome to another edition of "X-Plicit Fantasies!"

Once again it is my privilege to publish some outstanding stories from the X-Files universe. I hope everyone enjoys reading them as much as I did. The stories vary from light hearted to bleak. There is a mix of pairings, including Mulder/Krycek, Mulder/Skinner, and Skinner/Krycek. Perhaps there will be a little something for everyone's taste.

I would like to thank the contributors for their understanding. It has taken more than a year for all the stories to be finished. So I send my heart felt thanks to those writers who sent their stories a looong time ago and waited so patiently to see them in print.

As always, we would love to hear from the reader. Without the reader, this would be a very thankless task for both the writers and me. E-mail or snail mail — let us know what you liked, and what you hated about this zine. We can learn a great deal from our mistakes, but it's very gratifying to hear that we've done something right. Either way, let us know.

I would like to dedicate this zine to my good friend and X-File buddy, Carol. Thanks for all your help and encouragement, Carol. 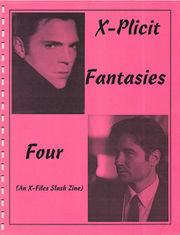 Welcome to the fourth issue of X-Plielt Fantasies. It has been a joy to have the contributions from Sue and Garnet. I admire these writers a great deal and thank them so much for their stories and poetry.

I hope you, the readers, enjoy the stories as much as I did. Do let me and the authors know what you think of the stories and the whole production. If you like what we're doing, tell us or if you think we could improve in some way, let us know that as well. 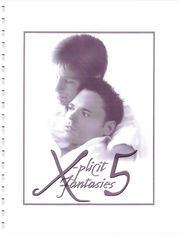 cover of issue #5, The Theban Band

X-Plicit Fantasies 5 was published in May 2003 and contains 192 pages.

The fic author's preface to the zine:

So, after nine years, the X-Files is finally gone, but, hopefully, not to be forgotten. Hopefully, XF fandom will continue for many years to come—in reruns, stories, art, poetry, zines, websites, and vids, just to name a few—and eventually join the ranks of those other fandoms which have survived the test of time and are still going strong after 20-30 years. I want to believe...

All I know, though, is that I loved the show from Day One, but I didn't actually "discover" XF fandom until just a few years ago. There's several people I can thank for that—Annie, who first mentioned in some off-hand fashion one day that there was M/K fic on the net; Jo Ann, who sold me my first XF zine and printed my first XF story and got me to go back to media cons after a 10+ year hiatus; and Alex Krycek himself, of course, the one and only original occasionally misunderstood sweet as sin bad boy in black leather who stole some of our hearts forever. 1 wouldn't be writing XF stories today without the three of them! And, most likely, this zine wouldn't be in anyone's hot little hands right this minute. Thanks guys!!!

But I feel I must also thank a few others who have offered their support for this "obsession" over the past few years. People like Carol, Connie, Jami, Bemice, Russian Rat, Zen and Nancy just to name a few, and, last but by far not least, Ned & Leny. They've provided encouragement and entertainment through their feedback to my stories and through their own stories and, in the case of Theban Band, clever little pictures which have their own special kind of inspiration.

Still, ever so yummy pics or not, for true inspiration, I must thank the Muse Herself, without which these four stories simply would not exist. If anything you read here pleases you in any way, then she is the source more than me. The original source of inspiration for Chris Carter and the source for all the stories which have poured off the pens and keyboards of XF fans for the last how many years. Without which, I may never have gotten back into fandom at all and without which I might not be able to talk to my Alex these days. And, let me tell you, he's well worth talking to. Even if he does think the stories I write get a bit too smutty for his taste.

So, I do hope you enjoy these four Krycek-centric stories. Two of them are crossover stories (one surprising, even to me) and two are M/K stories. Sorry, there are no Sk/K stories in this batch for those of you who like that particular pairing. Some other zine, some other time, okay? (Same rat time, same rat channel...).

Oh yeah, feedback is most implored, would be most adored, and would get likely get me to wiite more...