Where's Captain Kirk? is a 57-page slash Star Trek: TOS (with some SF) collection of fiction, art, vignettes, and poems. It was published in the UK. There were only 100 copies printed. It has art by T'Pow and Roo.

The name of the zine is from a song by the rock group, Spizzenergi, which was very popular at British con discos. 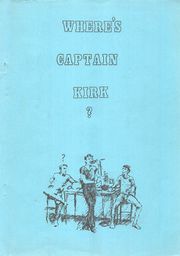 From Communicator #9: "A whimsical collection of K/S oriented stories by hitherto unheard of authors, lavishly illustrated by Roo and T'Pow with a limited run of 100 copies and no reprints. Age Statement required.}}

From A 2007 Interview with Fiona James:

One obscure zine was put out in the UK by “Sheila’s Chain Gang.” The “Chain Gang” met — and some still meet, after nearly thirty years—on Tuesday night. On some of those nights we proofread Stag/ScoTpress stuff, on some we collated the zines, on some we addressed envelopes or stuffed them (STAG, and later IDIC, both had over 1000 members) — hence “chain gang.” However, there were quite a few Tuesdays when we just talked; we talked Trek, Professionals (which was a secondary fandom for most of the group), stories, and zines, both gen and slash. One of the group was a regular writer for ScoTpress; one of the others had submitted one story. The others had written for the Pros slash circuit. One semi-member of the group who only joined us occasionally (Roo, aka the Missing Link) was the very artistic sister of one of the regulars and, as I remember, the suggestion that they should do a zine was primarily intended to provide a sort of showcase for some of Roo’s artwork—although one of her art college friends did a couple of pieces— not of the Trek characters—as well. Basically it was a spoof, although it wasn’t parody; the stories were written “straight.” They were only marginally slash, and the emphasis was on...not humour, exactly, but being light-hearted, not taking themselves too seriously. Most of the artwork is serious—there’s a great nude of Spock, for example — but some is light-hearted, and there’s also an inspired parody of one of F.’s pictures — the only actual parody in the zine. The title, Where's Captain Kirk? comes from a song by Spizz Energi. There isn’t a publication date on the zine[1] but as I remember it came out not long after the song, which was copyrighted in 1980, was being broadcast. There were only 100 copies printed, so it’s long out of print, and I don’t think many copies made it to America.

From the Zine's Editorial

Welcome to the first end probably the last, issue of "Where's Captain Kirk", a magazine which derives its title from the song of the same name by the wonderful Spizz Energi, to, whom many thanks for allowing us to reprint his lyrics. Several of the places owe a great debt to the world of contemporary music (although guaranteed low on street credibility). Most of the work contained herein sees the light of day for the first time, being the efforts of hitherto unknown authors. However their work in the sphere of 'zine collating is not unknown. Please don't take the stories too seriously -- they were written to entertain and are relatively smut-free.

Roo, that living legend in the world of art, supported by her compatriot T'POW, has provided her own superlative artwork (and lay-out). Special thanks to: Tanned Hauser the Typex Kid, the Mole, who dug proof reading, and Sheila, Janet and Valerie (three real people) who printed this meisterwork.

Gallery of Some Sample Interior Pages

In NTS #2, I mentioned "underground" stories, never published, but just passed around in carbon copies or photocopies. There have also been zines published "semi-privately" in very small print runs for small groups such as the "Contact group", or for special occasions or cons, such as THE CAGE (a ST genzine), published, I believe for SekWesterCon. WHERE'S CAPTAIN KIRK? (Margaret Rooney, editor) almost qualifies; it was mimeoed in Scotland, about 1982, in a limited edition of 100, and never circulated here. The contents are not exactly all humor but are all light-hearted, mostly tongue-in-cheek, and many clever and slightly crazy a welcome relief after the all too many self-consciously serious zines around. It was put out and written by a motley group of pseudonyms: T'Pow, Roo, Tanned Hauser, The Mole, Mort Darthur, The Chain Gang, The Missing Link, Broon Hilde, P.S. de Resistance, and the Typex Kid, as well as three Real People, well known in fandom, who printed it. Most are featured in cartoon form in various parts of the zine. All the artwork and cartoons --and great stuff it is! -- is by the editor, "Roo". She is one of the best artists in fandom, and her Kirks are the best; she's able to express his face perfectly, with any expression, using a very few careless-seeming lines that even survive bad mimeo repro. She never turns Kirk into a Hutch lookalike, or a 10-year-old, or gives him a square lantern-jaw, a wimpy pointed chin, a flat face, or worst of all, that pouty, petulant look that is so very unKirklike, and her Spocks are never hard and snotty looking. In fact, the art is a rare feast in this zine, with a gorgeous Spock nude, several classical art parodies, including an East Indian bird carrying two princes (Kirk and Spock) away on its back, a Spock as pirate portrait, a Gayle F-type weirdity with, for one thing, Kirk in high-heeled boots with a sock(?) around his cock, and one of my all-time favorite Trek illos (and it's not even K/S!): Scotty in his shirt and briefs (no trousers), festooned in confetti, a pair of ladles panties over one ear, opening his door at his birthday party. WHERE'S CAPTAIN KIRK? is named after a song by the Rock group, Spizz Energi, (very popular at British con "discos"). The lyrics to it and its sequel, "Spock's Missing!" are printed here, and segue into the first story, of the same name, and the most serious story In the zine... [2]