Well of the Souls

Well of the Souls is an Indiana Jones anthology fanzine. There are six issues.

A flyer for #4 calls it "the only regularly-published Indiana Jones zine."

What makes WOTS unique: One of the contributors to #5 made some comments me awhile back about the zine, and she was right. It's cheap, it's sleazy, it's tacky, it's weird, it's silly, and it's damn proud of itl It has always been that way. I'm in this for the fun of it. You want four-color covers and perfect binding, there are any number of good zines on the market I'll be happy to recommend. What you get with WOTS is, more than anything, an attitude: "Take it easy, kid, it's only a movie." Or maybe, "We're only here for the beer." WOTS' editorial policy has always been: if I like it, I print it. If I don't, I don't. I don't care if you're a big name fan or somebody who just fell off the turnip truck. If it's offbeat or tongue-in-cheek (but well-written, I hasten to add), it's got a home here. And remember, it's all in fun, so don't anybody get huffy about it. Some people are starting to take fandom too seriously. I encourage you to slap me silly if I ever do. [1]

Well of the Souls 1 was published in January 1982 and contains 62 pages. It contains short stories, poetry, art, cartoons, and trivia. 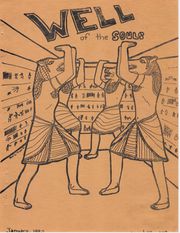 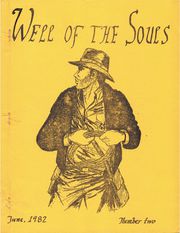 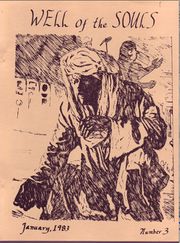 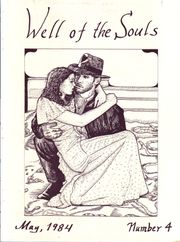 The cover is by Martynn, and the interior art is by Cheree Cargill, Cheryl Fint, B.J. Kreuz, Cathy Woldow, and Sheila Truax.

Well of the Souls 5 was published in January 1986. A two-time BALROG nominee. 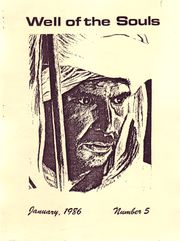 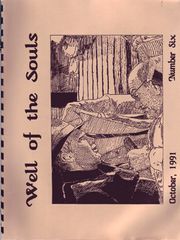 From a submission request in Zine Scene: "Due out for MediaWest 1991. After a hiatus, WOTS returns for its final (sob) issue. Going back to my original philosophy of a quality zine that you don't need a fork-lift to pick up, or a bank loan to buy, this will feature more of the adventures of Henry and Junior in "Here Abide Monsters" by Sheila Paulson. It'll be less than 100 pages. It'll be less than $10.00."