VegaSH Convention Fanzine is the gen and slash anthology for VegaSH Con. 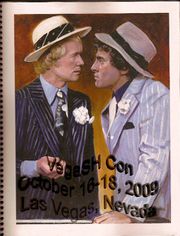 The zine has 190 pages (mixed gen and slash) with a color cover by Lorraine Brevig, 4 interior art pieces by Enednoviel, and 3 puzzle pages by Christine.

Even as I type this with the con only two and a half weeks away, I still can't beheve I'm holding a con! Just two years ago, I had never even been to a Starsky & Hutch con, or met any of my onhne S&H buddies in person. Then I went to the last Zebracon, well, because it was the last one and I didn't want to miss out. Not only did I have a great time, but I met a bunch of great people. So I had to go to SHarecon the next year to see all my friends again. That's when I started saying, "You know, it's not fair that us west-coasters always have to fly across the country for these things." And, voila, VegaSH Con was born. I hope this will be the first of many.

I have to thank a few people without whom this con never would have gotten off the ground. First and foremost, are Flamingo and CC. Flamingo gave me loads of advice on con-running and patiently answered my bazillion questions. Plus, she is responsible for this lovely zine you're holding. CC was a never-ending font of support and encouragement and just generally convinced me that I could do this thing. She is a games-and-scheduhng guru and took charge of both those areas.

Keri was another source of support, helped out a lot with the zine, and is a panel moderator extraordinaire.

Pepper, as always, was a reliable source of painstaking data and trivia. Pretty much anything involving a detail of the show was Pepper's doing.

Marion provided lovely artwork for the zine and some of the con goodies. Lorraine gave us a beautiful painting for the zine cover.

Molo was in charge of the fabulous vid show.

Dawn provided some of the handmade goodies everyone got in their swag bags.

I think everyone will be surprised by this zine. I think it is as good as any zine published, both in content and presentation. However, I am proudest that it contains Defenses Down, a previously unpublished story by Paula Wilshe. I have to thank Keri for allowing us to pubhshed it here. Defenses Down was the first S&H story Paula ever wrote. She never had any intentions of publishing it, but sent me a copy because she knew I'd love it. Fans of her work will love this early story, even if it doesn't have the polish of her later work. It has all of the sweet relationship between the guys that we saw in her later stories.

A WORD FROM THE BIRD'S BEAK...

I don't have a lot to add to Marcy's comments, except to add my own thanks to everyone who trusted me with their stories, puzzles, and art. Putting this zine together really helped kick in the old creative juices again. It was wonderful working with everyone, and I appreciate more than I can say everyone's quick turnaround and generous spirit regarding my rapid and not-always-diplomatic edits.

I also want to especially thank Keri for always being at the other end of the phone when I needed her. (Which is a lot!) And Rosemary, who's always in the basement when I need her. ;-)

Anne and I wiU be driving from Maryland to Las Vegas for the joy of attending a con I'm not throwing! It's been a great year for S&H with two cons this year (VegaSH and Cabrillo) and one next year (SHareCon). I can't wait to see everyone, and share 3 days of unbridled SH love. For those of you who can't make it, enjoy the zine and get a flavor of the fun! I hope we'll see you at subsequent cons.