Paula Wilshe was a fanfiction writer and zine publisher.

Paula was also well-known--and perhaps best-loved -- for her tireless, compassionate work with new writers, encouraging them every step of the way. Helping them to find their voice and style. For this reason, and many others, the Paula Wilshe New SH Writer Award was created in her memory, to honor this wonderful woman. 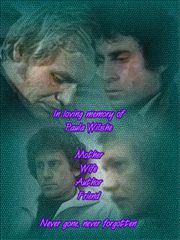 In addition the Starsky and Hutch Virtual Season (online)‎ designed a multi-media memorial for her. It is archived here, Archived version.

A Memorial to Paula

There are times when one is blessed with such an amazing friendship it transcends normal fan communication. Such was the case when Paula Wilshe came into my life. An avid fan of Perfect Strangers, Paula was an enthusiastic supporter of P.S. I Love You! and one of my best friends during that time. We referred to each other as "Cousin" and shared our P.S. fan fiction and story ideas. Many many late nights were spent talking on the phone or faxing back and forth to share the latest. Paula was 100% dedicated to her family as well as her job in an emergency room (at the receiving desk). She was also one of the best writers in fandom I have ever known. She took over production of the Perfect Strangers newsletter when I was overcome with other projects and published two full issues before it folded. After Perfect Strangers our interests went different ways but we kept in touch off and on. In the 21st century she became very active on the Internet and won countless awards for her Starsky & Hutch fan fiction from various websites. Paula Wilshe made such an impact in the Starsky & Hutch fan community that a writing award from SHareCon is named in her honor... Sadly Paula passed away in 2003 after a brave fight against breast cancer. She was far too young to leave us and I know everyone who was touched by her has felt a deep loss. She was one of those people who reached out and embraced new writers, new fans, new friends. As I compile this website and recall those days I can't describe how much I miss her. I miss you, Cousin. I wish you were here. At least I know everyone will love your stories as much as I do. [1]