Are you looking for Starsky and Hutch Virtual Season (zine)?

The Starsky and Hutch Virtual Season is a community based series of slash fan fiction "episodes" that continue past the 4th season where the aired version of Starsky & Hutch ended. Each season was divided into 'aired episodes' with authors posting their fan fiction and art according to a fictional broadcast schedule. In addition, a mailing list was set up to allow fans to discuss the episodes as they 'aired'.

Seasons 5-7 were completed between 2001 and 2003. Season 8 was begun in 2004 but only aired 4 episodes before it went on hiatus. ZebraThree Productions announced plans to air an abbreviated Season 9 in the fall of 2005, but the plans fell through. Eventually some of the stories featured on the virtual seasons were bound into fanzines.

From the community FAQ: "Starsky and Hutch has been off the air for over 25 years, but has certainly not been out of the hearts and minds of the fans. ZebraThree Productions was formed by a group of writers and other creative individuals whose mission is to produce a series of stories that will create a virtual 5th season of Starsky and Hutch. Our virtual season will begin after the events depicted in Sweet Revenge, the final aired episode of Starsky and Hutch."

In order to maintain some continuity across the seasons, writers were instructed to: "Please be familiar with our virtual season canon. If you will be writing an episode later in the series, please read those stories which come before your episode (and are made available to you prior to your writing deadline). The Steering Committee will be checking eps for continuity issues, but your familiarity with virtual season canon will make the process smoother." They were asked to avoid discussing upcoming episodes and to avoid spoilers when talking with other fans. The Steering Committee also offered writers access to "two medical consultants, a psychological consultant, and probably some experts in a few other fields as well" with the goal of reducing factual errors in the stories.

The S&H Slash Virtual Season Mailing List was created in June 2001. This was met with some controversy regarding the fandom's small size and perceived gate-keeping.

In 2001, long before LiveJournal spawned the "Big Bang" phenomena, a group of Starsky and Hutch fans decided to work on an ambitious undertaking: the Starsky and Hutch Slash Virtual Season. Multiple writers, editors, and artists devised a plan for a cohesive continuing series of stories that would take up Starsky and Hutch's story right after the aired series concluded. The last aired episode ended in Season 4 with Starsky surviving a near-fatal assassination attempt. So, in the Virtual Season 5, as the summary of the first story explains, "Starsky grapples with his recovery, Hutch begins working with a temporary partner, and both men face changing feelings about their relationship."

The part of Hutch beginning to easily agreeing to work with his temporary partner and quickly forming a friendship with him is really very upsetting about this whole season.Also Hutch continues his friendship with him even after Starsky returns to work and he taunts Starsky about being jealous in that regard.This fact destroys the very essence of the relationship between them.How can Hutch agree to work with someone else and go about enjoying doing so and falling head over heels in friendship with a third person when on the other side Starsky is undergoing painful recovery.It is really heart breaking to read the stories in this whole season because of this fact.This season would have been great without the temporary partner being brought in.In most of the stories in the season Starsky is taunted by Hutch of being jealous which is really sad.How can it be 'Me and Thee' any longer when it has already has already been destroyed by bringing in a third person between them and by Hutch working with him so happily.Hutch is glorified in almost all of the episodes in this whole season at the expense of Starsky.Everything Starsky has done for Hutch throughout the four seasons are treated as nothing and only Hutch's contributions are glorified.

Not just a rec for one or two stories today, but a plethora of fic! What is a virtual season, I hear you ask? It's when writers continue a canceled series in story form, but in a season arc (more or less) like the episodes of a TV series. Ten years ago, I wrote in a virtual season for another series, The Invisible Man, and it's a heck of a lot of work to pull off, particularly nearly weekly as they did here. Many authors team together so that the stories are not just an anthology, but flow into each other and don't deviate from a single universe.

If you've never dipped a toe into the Starsky and Hutch slash virtual season, the first story starts soon after Starsky was shot and is recovering. Hutch has a temporary partner. He and Starsky are a couple--and eventually, our Starsk does get back on the force. They're a team once more!

The creme de la creme of S&H authors circa 2003 wrote these stories, and you will recognize many of the names. [2] 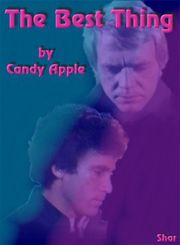 cover for the first episode of Season 5, The Best Thing by Candy Apple, artist: Shar

The Fifth Season kicked off on 6/12/2001 with "The Best Thing" by Candy Apple. Stories (or episodes) were aired weekly thereafter with a hiatus during the events of 9/11. 19 episodes aired with contributions from over 7 writers and artists. In Week 4 a "Special Feature" of artwork by fan artists Becky, Shar and Virginia Sky was showcased. In Week 8 another Special Feature offered screenshots from the show along with a bookmark designed by Virginia Sky. The Special Feature in November offered a 2002 Starsky and Hutch downloadable calendar and holiday greeting cards. The 5th season ended on December 21, 2001. The 2001 Schedule is here complete with air dates and story summaries. 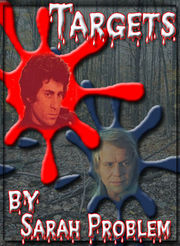 Season 6 began on 4/30/2002 with "Targets" by Sarah Problem. Week 5 offered 'Special Features' from the Art Department, including wallpapers, stationery, and sound-bytes from the show. Fifteen 'episodes' were produced with over 12 writers and artists contributing. Season 6 ended on 2/10/2002 and the complete schedule with story summaries can be found here. 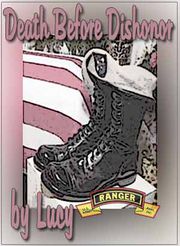 Season 7 began with Lucy's "Death Before Dishonor" on 5/20/2003. Special features included a tribute to Paula Wilshe along with wallpapers, stationary and a sketch by Lorraine Brevig. Momentum flagged as only five episodes were produced with over 7 artists and writers contributing. The season ended on 12/23/2003 with a "Bag O' Holliday Goodies" which included a short story by pepcidDC & Firefly along with additional graphics. The schedule for Season 7, along with story summaries, can be found here.