Trekkie... Trekkie... What is Trekkie? is a late 1970s essay by Jacqueline Bielowicz. 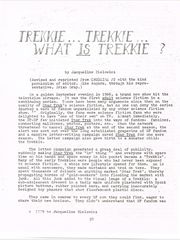 first page of the essay from Sol Plus

The 1979 reprint includes this addition: "With the new Star Trek movie coming out, it may once again become the "in" thing' and we will see a resurgence of Trekkies. Of course, since [my original essay was printed in 1977], Star Wars and Battlestar Galatica have sparked their own sub-cult in SF fandom, but only time will tell if they have the staying power of Star Trek. Just as a side note, there seems to be developing some hostilities between Trek fen and Wars fen."

The title of the essay is a reference to the Star Trek episode "Spock's Brain."

Originally, the [Star Trek] fans were science fiction fans who were delighted to have "one of their own" on TV. Almost immediately, the ST-SF fen initiated Star Trek into the ways of fandom: fanzines, connecting mailboxes, photos, posters, etc. When the network threatened to cancel Star Trek at the end of the second season, the alert was sent out over the long established grapevine of SF fandom and a massive letter-writing campaign saved Star Trek for one more season. The letter campaign also gave birth to a monster child: the Trekkie.

The letter campaign generated a great deal of publicity, suddenly making Star Trek the "in" thing and everyone with spare time on his hands and spare money in his pocket became a "Trekkie". Many of the early Trekkies were people who had never been exposed to science fiction. A whole new lifestyle opened for them. As, is usual with newcomers, they made mistakes and trod on toes. They spent thousands of dollars on anything marked "Star Trek", thereby propagating hordes of "gold-seekers" into flooding the market with junk. All this junk added to the visual image of a Trekkie: a sub-adolescent dressed in a badly made uniform plastered with Spock picture buttons, rubber pointed ears, and carrying inaccurately designed toy phasers that shot fluorescent plastic discs.

They came in swarms to every SF con they could find, eager to share their new horizon. They didn't understand that SF fandom was a long established group who had already been tempered in a crucible of outside prejudice, group support, and time. To the older fen, Star Trek was an interesting incident in science fiction history, but not the climax. At this time, a rift opened between SF fen and Trek fen. The older fen got tired of the uproar over a second-rate T.V. show and the Trek fan, often a neo-SF fan, felt snubbed by the lack of interest by SF fen for Star Trek. This rift grew into a chasm of gigantic proportions. Ask yourself, as a serious SF fan, what is today's Trek fan really like?

The Trekkie is still pretty much as original myths portray him; he is someone who thinks Star Trek is "cool". He still buys any junk that is marked "Star Trek", swarms to any con where he might get a chance to breathe the same air as the STARS (!!!), and generally makes a nuisance of himself. He neither knows nor cares about the finer points of Star Trek philosophy. He is just interested in having a good time with the "fashionable" crowd at the time. Fortunately, to the Trekkie, fandom will only be a passing fancy and eventually, when the fad moves on to other things, the Trekkie will drift along with the crowd. That takes care of about 80% of "Trek" fandom...

Usually, the Trekker is a committed, person: he is committed to his life, his community, his world. Star Trek/portrayed a future as the Trekker hopes it will be. The Trekker works for that, brighter future; contributing time and money to charities, political activism, and awareness of the total world as it is today. Of course, the Trekker isn’t the perfect person. We have fen who are liars, lazy, irresponsible, mental cases, and with all the other foibles of the general public. However, your basic Trekker is often just a SF fan whose main interest is Star Trek; similar to the SF fen who are devoted to Burroughs, Flash Gorden, or Marion Zimmer Bradley. A Trekker is a person not much different than you. The Trekker is not always as visual as the Trekkie. The active Trekker does organize the conventions, write fiction and letters, edit fanzines, form clubs, and generally do all the other things that SF fandom has done these 40 odd years.

The passive Trekker is the one who is always willing to work on club projects, collate fanzines, avoid Trek junk, and attend cons for the sole purpose of communicating with others. You may never see their name in a letter column or hear them give a talk on the newest rocket propulsion system, but you will know they are there by their warm, loving support and interest.

So the next time you sit down next to some one who turns out to be a Trek fan, don't flinch. Reach out. If you are lucky, you will find a new friend who is eager to exchange ideas with you on all subjects. If you do get a Trekkie, find out if they are a neo-Trekkie. Often someone who is new into the game can grow into a Trekker and a serious SF fan with love and patience. If he/she is a true dyed-in-the-wool Trekkie and has no intention of changing, pretend that the batteries in your hearing aid just died and make good your escape. That's what I do.