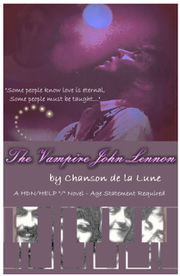 According to an ad by Agent With Style, it was originally to have been published in 2003, and was to have been written by a fan with the pseud, "Jello Pez."

Summary from a Distributor

Some people know that love is eternal...some people must be taught. Paul McCartney has much to learn from the three men who wait for him at the end of his life. And he has even more to teach them. A magical, lyrical, sweet, loving, thrilling, hugely funny and deeply erotic love story between four men with mythical dimensions. At the heart of it is the profoundly compelling love between John and Paul who must find make peace with each other before the four of them can be one. Some B&D elements, multiple partner lovemaking, romance, humor, and, oh, some pirates, too. By a well-known fan writer working behind the name of Chanson de la Lune. This is not RPS, but based on the movie-verses of "Help!", "A Hard Day's Night" and "Let It Be".

Summary from the Zine's Preface

This is a work of fiction. This is a fan novel set in the “Hard Day’s Night”, “Help” and the assumed-fiction “Let it Be” universes, with nods to some other basic Beatles historical facts (some of it is, indeed, true). I am no more saying that the Beatles are/were gay than I’m saying they are/were vampires— one should not infer literal reality in this novel any more than one should assume Picasso’s women had three eyes or that Robert Burns’ wife literally looked like a rose. It’s a metaphor — a myth — a story phrased in the mythological gods of the modern era and the homoerotic vampire tradition. It’s also a slash novel, meant for a specific community of readers (and we all understand the game rules of the art form) and not for the reading public. I’ve also removed the names of the innocent (wives and families), since they are not gods of the common mythology and just regular old folks like you and me. The only real person’s name employed is Timothy Leary’s, and I figured Doc Tim would understand... In writing this, I wanted to create a story to satisfy all the lost ends of Beatlemania for those fans still haunted by it. It is what I think may have happened based upon my assessment of known events—it is not presented as a fact-based representation of what did happen. I should also point out how this whole story came about: In a very Anne Rice-like setting, I dreamt I was the interviewer of the vampire John Lennon. John then went on to relate this story… most of the major events (in terms of Paul and him) came from that dream (yes, including the fucking). This includes his own commentary on Paul’s later work (some of which I agree with and some of which I don’t). Most of the rest is my creative confabulation. Just in case there was any actual external input made, I’d like to give credit where credit is due.

Comments by the Author

I write fan fiction and my own worlds. Most fan writers do. And in many ways, my translation of that fan world is my own world. I bring to it my sensibilities, my perspectives, etc. My Blake is different than xBryn Lantry's "Blake" which is different from EPS' "Blake" (gosh, whatever happened to old EPS ;) ... etc. The constraints are only those of something we love in the first place so they aren't really limits but guidelines.

I suspect the experience of fandom is something uniquely individual. It's kind of like a love of a certain type of music. If you don't get it, you don't get it. Musicians love playing their own stuff but they also love playing songs they have a special feeling for. That's all fan writing is.

That said, I don't write lit fic with the one exception of "Sherlock Holmes" and everybody writes Holmes ... even the pro writers kvetching about fan fic write pastiches. The Vampire John Lennon was mistaken as Anne Rice fan fic by the puritan enclave that took over GAFF, primarily because they were not sophisticated enough readers to get that "The Vampire so-and-so" is a common title for any vampire. As to the question of Real People Fic, it's only Beatles fan fic in the abstract sense(based in a holographic world spun out of their movies). Even so, the Beatles have been used in fictional form in over thirty professional novels and short stories. In the words of Sir Paul, at least the Beatles slash writers have the decency to call it fiction ... unlike various supposed "biographies". lol

I have no trouble with other people writing lit fan fic. People will always muse about scenarios in their own minds ... why not share them? To try to limit expressions seems on the edge of becoming thought police. I've had people write in my own universes. It doesn't bother me. I have pro writer friends who actually are touched when they read fan fiction (I haven't talked to her in a good while, but at one time L.J. Smith used to amiably correspond with her fan writers). I certainly think we should respect the wishes of writers who don't want people playing in their universes, though.

I also think the writer of Brokeback Mountain needs to realize that the fan fic isn't written in her universe. The people are ficcing the film, not her novella. Her caterwauling comes off a bit like ignorant drama queening to me.

Media fans are encouraged by most intelligent media producers. The smart producers realize that we're creating viral advertising that will only push their product. The producers of "Monk", for instance, actually created a graphics site to help fans build their own web sites. The producers had a directory of fan fiction, too.

The Vampire John Lennon by Chanson de la Lune (194 pages!!) which is khmm a really… interesting fanfiction it practically disappeared from the internet because the author was not really happy about the negative comments, but who are we kidding - of course you can still find it ;) here you can find the awfully funny and amazing commentary of the story enjoy it! - I guess :)

I’m sorry I don’t have any other vampire fics, but the ones I’ve found either don’t feature McLennon or just simply bad…  :( [2]

A little history: The Vampire John Lennon was first posted on GAFF years and years ago. I can't for the life of me remember whether it was on green or orange, but what I do remember quite vividly is the author completely flipping their shit at us. They deleted the story which, unfortunately for them, she had originally posted in a downloadable .pdf format. Of course this meant that we had a copy uploaded pretty quickly, half to spite her and half out of a genuine desire to rip it to shreds. [3]

Fastforward to now. GAFF is gone, our upload links vanished into the aether, and I remember this story. I say to myself “Jeez, that was a bad one. I'd like to read it again.” Thus begins my quest to find it. The author is still totally paranoid because of us. She had taken all sorts of mad precautions to keep people from finding it. You could request the story, otherwise there was no way to get it. However, her efforts were undone by something moronically simple: Google. That's right: I got a copy of it off of Google's cache. Now, this copy was missing all the beautiful images the original was endowed with, so I decided that it would be pretty damn easy to just ask for the story. Which I did. She gave it to me happily. Here's a link.

So there ends an epic saga of pure stupidity and I have a copy of a valuable artifact on my hands. I swear that I will treat this with responsibility and careful – oh my god. [4]

I just saw that "The Vampire John Lennon" , Chanson la Lune's The Beatles "vampire" story, is now available from Agent With Style.

I was lucky enough -- through a friend of a friend of a friend -- to read this already. It's excellent; can't recommend it enough. If you're at all familiar with The Beatles, if you have any nostalgic investment and/or musical appreciation for the group, this is really a must read.

Chanson la Lune is obviously steeped in Beatles' mythos as well as fact but makes it very clear that this is a work of fiction, not RPS at all. I'm very uncomfortable with RPS but was never uncomfortable, not for a minute, with this story.

Everything about the writing is excellent; plot, imagery, word usage, atmosphere. la Lune captured the essence and the personality of each individual member of The Beatles without being intrusive, basing the characters on the outward persona each man allowed the public to see. At no time did I feel like I was "peeping" into private lives. Yet, at the same time, this is a very intimate story that blends who the public knew with speculation on how these people might respond given this particular situation.

This is a vampire story but none like I've ever encountered before. I'm saturated in vampire! I published a professional vampire anthology, "Prisoners of the Night", for 14 years. Part of my job as editor of POTN was to be familiar with as much vampire literature as I could be. I've never run into vampires like the ones in "The Vampire John Lennon". It is not a gory kind of vampire but more of an ethereal kind of vampire! In other words, if the very word "vampire" is scaring you away from this story, don't let it!

The author is not new to me; I've read her fiction for years (under different names) and have always held her among my favorite fan authors. She does not disappoint with this story, not at all. Reading her writing is a delight and highly rewarding.

Oh, yeah. And there are pirates!