The Spike's Slash Page was a personal slash fanfiction site. Main fandoms were The X-Files and Buffy the Vampire Slayer.

The site was hosted by Nonie Rider and graphics were provided by Debchan and also Te.

Warning on the main page:

These stories are all slash, all smutty, all somewhat perverse in art and aspect. If you are under 18, offended by sexually graphic material or male to male sexual interaction, or if it is illegal for you to read this material, then please leave the site without reading further.

The site was linked to as a favorite Buffy the Vampire Slayer slash site at Raonaid's Home Page[1].

The Spike's Buffy and Angel Slash

Stories by The Spike

The Spike's Other Slash Page 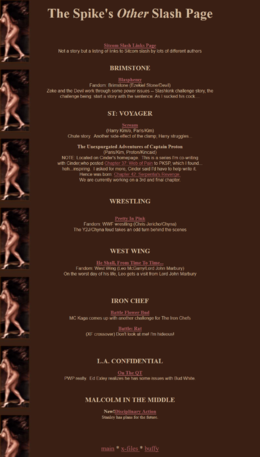 The Spike's Other Slash Page

MALCOLM IN THE MIDDLE

Hitchhiker's Guide To The Galaxy

Two Guys A Girl And A Pizza Place