The Rebel and the Rogue

You may be looking for the zine The Renegade and the Rogue.

The Rebel and the Rogue is a gen Star Wars 167-page anthology of fiction, art, poetry, and cartoons. 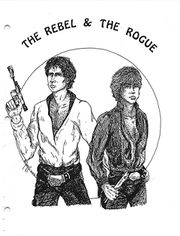 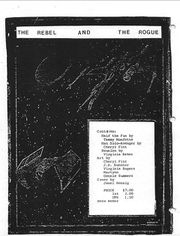 flyer, included in the zine itself, which is odd

A Zine that "Followed the Rules"

An ad in Datazine #18 says "We plan to conform to the standards George Lucas has set for this magazine."

From the zine itself: "This zine is not intended to infringe upon the copyrights held by Lucasfilm. Permission was received in advance from Lucasfilm and copies will be sent to them of this and all future zines containing material copyrighted by Lucasfilm. Copyrights on original material revert to artists and authors."

This is what they are referring to: Open Letter to Star Wars Zine Publishers.

There were a number of personal statements from fans regarding this zine.

In Scoundrel #6, a fan writes this personal statement and several fans include similar letters:

Hi, there! Remember me? I contributed to your zine, REBEL AND THE ROGUE. I understand that the zine has already been published and has been available for some time. I'm writing you this letter to find out why I have not yet received my contributor's copy. Is there any problem? I would hate to have to blast you in the letterzines, but that is what you are forcing me to do. First of all, you've had my story since February 8, 1983, and the last time I spoke to you was the day you were "moving" to Texas, I find that you are now residing in Indiana. Then, out of nowhere, I re ceive a price flyer. For a zine I CONTRIBUTED TO! Trying to get you on the phone hasn't helped either- your phone's been disconnected. As well, a short note to you a month ago, asking if there was any problem in getting my contributor's copy to me, SASE enclosed, has gone unanswered. I'm sorry to hear that you have been sick, but that is still no excuse for not trying to communicate. I know that you have not lost my address. My receipt of your price flyer proved that. If I do not receive my contributor's copy of REBEL AND ROGUE in another month's time, I will be sending out a copy of this letter to DATAZINE, UNIVERSAL TRANSLATOR, SOUTHERN ENCLAVE and SCOUNDREL for its inclusion in their next issues.... As an addendum, I would like to say that about a month ago, I found out, and not from Rena, that I am not in the zine after all! It's been almost two years now with absolutely no attempt at any kind of personal communication from her end. Whatever happened to the art of trust in fandom? It used to be that an oral acceptance was enough. Now, you'd better get it in writing, too!