The Madness Underneath is a popular Klaus/Caroline All Human AU The Vampire Diaries (TV) fic by Hybridlovelies based heavily on Sherlock Holmes characters and cases. It could be considered a fusion with Elementary as it primarily follows the plot of that series.

Official Summary:
Caroline is a psych student working as a sober companion in Chicago, hired by Elijah Mikaelson to assist his brother, Klaus, who is fresh out of rehab. For the next six weeks she'll be with him 24/7 helping him to maintain a sober life. Caroline will soon discover Klaus is no ordinary client. AH/AU, based off of Elementry/Sherlock Holmes. Do not have to be a fan of Holmes to read!

The fic has been widely acclaimed by fans for its writing, particularly its dialogue and characterisation; the emotions it evokes; and the romance between the two leads. 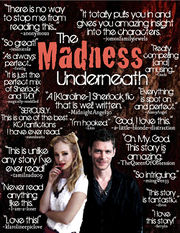 For those of you who love BBC’s Sherlock but most importantly Elementary, this is the fic you should not miss. This fic follows the basic plot of Elementary having Klaus as a recovering addict and Caroline as his sober companion. The two don’t start as the best of friends but quickly they both find themselves quite fond of one another. Klaus’ job as a consulting detective intrigues Caroline but it also brings Klaus a step closer to dealing with his past demons involving his little sister Rebekah.[2]

The Madness Underneath is done.

I am done reading The Madness Underneath.

my eyes are continuing to fill with tears that I refuse to shed. The fic will live on in INFAMY for ALL KC FANS TO LOVE AND ENJOY AND PASS ON TO THEIR CHILDREN AND THEIR CHILDREN’S CHILDREN. It’s the KC Circle of Life.

TMU? One for the record books and the storybooks.

Katie, m’friend, you have out done yourself with this amazing piece of writing and I can’t even begin to imagine the amount of time and effort and research it took to write this entire story, but just know that I sincerely appreciate ALL of the hard work you put into this.

It quickly became one of my favorite stories, but now it finishes out as one of my top 5 favorite KC fics of ALL TIME! I just loved every single second of it and now I just want to go read it all again. This one’s going in my eBook library to enjoy for all times.

Thank you, Katie, for giving us such an amazing and exciting KC fic.

I love this story! Because of this, I started watching Elementary. It’s amazing, Katie is amazing! Her stories are so captivating and brilliant! I’m so excited to get to read this one over and over.[4]

This is genuinely so gorgeously written? The first few paragraphs FUCKED ME UP! I was hooked form the beginning! Loving klaus and Caroline’s dialogue and I’m just happy :,,) this is so good and I can’t wait to read more! Letting me out on exam stress XD thank you![5]

I just re-read this fanfiction and was reminded of how great it was. You have great plot and I love the tension between Klaus and Caroline. I would love, love, love to see more of the sequel![5]

Okaaaay, let the tears roll cause I CAN'T BELIEVE IT'S OVER


Your story is really one of the craziest and best stories i have ever read
It has lots and lots of drama, thriller, mystery, comedy, and lovey dovey romance and i will certainly miss it


You are an Awesome writer and very talented[5]

That was amazing, I just loved it much! Great end for a great story. You didn't disappointed us one bit with this fanfiction, it was great since the beginning. One of my favorite fics for sure! You're an excellent writer and I really hope seeing more stories by you. And thanks for make him alive again or I would be crying like hell here :)[5]

THANK YOU FOR WRITING AN AMAZING STORY! THIS HAS BEEN ONE OF THE BEST KLAROLINE FFS I HAVE EVER READ! Everyone would go crazy on twitter when this updates! I'm going to miss this story, I look forward to your future stories :)[5]

The idea behind the story was awesome and it was brilliantly written.

I really, really enjoyed this story and honestly couldn't wait til new chapters were released so thank you for writing a story that kept me and countless others genuinely interested til the very end. I can't wait to see what you do next. Keep writing and posting gorgeous stories

Some fans, however, have criticised the dynamic between Klaus and Caroline, and in particular the fic's conclusion.

I really enjoyed this fanfic, but I think that she forgave him way too easily. The way he controls her and makes all the decisions for her is borderline psychotic and a sign of an abusive relationship. Furthermore, the way she just accepts everything he did, all the lies he told her, all the deception and scheming he did behind her back, all the trauma he put her through, and the fact that he ONLY came back into her life when she was moving on is just not right, is unfair, and just shows that she has issues of insecurity and self-worth that allow her to let men walk all over her. So, while this fanfic overall is a phenomenal piece of writing that showcases your ability as a writer, the ending was too forced and too rushed for my liking. Either Klaus should've told her WAY sooner (...) or she should have made him grovel and work for it like Stephen said.[5]

No, I can't take that ending, what a douchey move, she forgave him way too easily even though I understand that their love was just so great she couldn't live without him but god, what a dick.[5]

On 13 Jul 2013 a fanfic trailer was released on YouTube by AngeloftheNight30. It can be accessed here. An ebook has been created by a fan of the story here.

The fic has been tranlated into Chinese.

Sometime in 2015,[6] Hybridlovelies posted the first chaper of a sequel to The Madness Underneath, 'The Shadow Within'. It was published as a thank you to fans who had raised money to help get her back on her feet after losing most of her possessions to a fire.[7]

The author's note for Chapter 1 of the sequel addresses fans' dissatisfaction with the ending of The Madness Underneath, saying,

If you were SUPER SATISFIED with the end of TMU...you may not want to read this. Everything isn't moonlight and roses for our OTP at the beginning of this story.

If you thought that Caroline gave into Klaus too easily and that everything wrapped up in too much of a cookie cutter way...you might like this a little more :)

Though Hybridlovelies originally stated she had no intention of continuing the sequel, a "bonus" second chapter was posted on April 22, 2016. Hybridlovelies cautioned that the characters might be OOC, stating that,

I no longer what any of the shows, so it's been awhile since I've actually spent any time with these guys so I'm not as attuned to their personalities and speech as I once was.