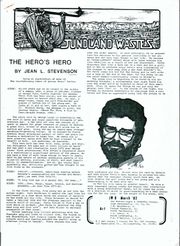 The Hero's Hero is an article by Jean L. Stevenson in Jundland Wastes #8. In it, she explores a number of George Lucas' movies, as well as Joseph Campbell's books, and discusses how those definitions relate to the characters in Star Wars.

Princess Leia Organa, senator of Alderaan, is only 16-18 years of age when first met, but she is already confident of her ability to fill the duties implicit in such titles. In fact, she is too responsible, too serious, a non-survival trait from which Han Solo attempts to rescue her by shading his every word to her with a teasing, overly respectful tone. But she is strong enough to defy Governor Tarkin, to see her world completely destroyed, to withstand Darth Vader's questioning, to help engineer her own rescue (to the affronted dismay of at least one of her male rescuers), to think logically in the midst of crisis after crisis, to declare her love proudly, both in the face of her enemy and in the uncertainty of the enigmatic actions and attitudes of the man she loves. Her beauty and plight drew Luke Skywalker away from the destruction of all he has known into the rebellion and the "good" fight. Her importance to the outcome is emphasized by her uniqueness. She is the only, female character of consequence so far, and somehow most machinations and activities in the saga center on efforts to find, rescue, protect, or control her. But perhaps her greatest strength can be seen through the eyes of her enemies: they are in awe of her. Continually, they try to capture her, and yet, when they do, she walks among them and defeats them at every turn, though not without private sacrifice.

This then is the definition of a reward and a hero. At a time when the concept of woman-as-prize has been abused, assaulted, and made anathema to many women and some few perceptive men in the American culture, Lucas insists that they are the prize, but a prize given new dimension in his hands. As delineated here, Woman follows her own paths, seeks her own precious goal of political triumph or personal freedom. She faces in her growing the same difficulties, the same impossible dangers as any man. And once she is successful in her own right, she is a partner, not a possession. She is an instigator as well as a follower, and in both roles she is entitled to a just share of the results. She is the hero's hero, the companion on the journey who makes the going less difficult and who is herself the greater goal. And it is her right and responsibility to tip the balance of fate from one man to another. He who is given the love of the princess-maiden, which is hers to bestow and not his by right of conquest defeats the enemy and wins the golden prize.