From Fanlore
(Redirected from The Ermine Violin)
Jump to: navigation, search

The Ermine Violin is a gen Star Trek: TOS and Science Fiction anthology.

The title comes from a part in the Star Trek: TOS episode, "The Trouble with Tribbles." It that episode, Spock notes an ermine violin would be a furry and pleasant-sounding alternative to tribbles. It presumably would have combined the sound qualities of a traditional violin with the soft fur of an ermine, an earth mammal related to a weasel. Spock noted that he could not see an advantage to having such an instrument.

It is a sister zine to The Jedi Journal.

From an editorial in The Jedi Journal:

A long time ago in a galaxy far, far away... Newark, Delaware to exact, five students at the University of Delaware decided to start a Star Trek fanzine, "The Ermine Violin." Despite the stated Star Trek orientation, we were flooded with Star Wars material. It seemed logical to the staff (now seven) to plan for a Special Issue that was mostly Star Wars. This stared a deluge. So... bowing to the inevitable, The Ermine Violin Press presents a new Star Wars fanzine, The Jedi Journal [which] will be published irregularly, and hopefully alternate with 'The Ermine Violin'. 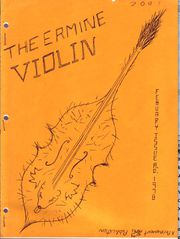 cover of issue #1 by Colleen Winters

The Ermine Violin 1 was published in February 1978 and contains 42 pages. It has a front cover by Colleen Winters.

The Ermine Violin 2 was published in July 1978 and contains 60 pages. The art is by Colleen Winters and Michele Waterloo. and the lettering is by Tom Epp. 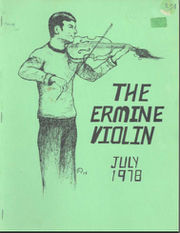 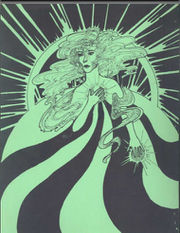 back cover of issue #2, Michelle Waterloo

From the editorial: "We received quite a few comments about our first issue. As a result, we're introducing a couple of innovations in this issue. First: a really unique idea - page numbers. There were a few in the last issue. It went over so well that we've decided to add more. Second: we've used presstype transfer lettering for most of the titles. This is a direct result of the number of negative comments received on the hand-lettered titles of the first issue. Also, in this issue, we've tried to have a larger proportion of STAR TREK material. After all, this is a STAR TREK fanzine, theoretically. Another difference is that we have expanded from a 30-page 'zine to 60 pages. We'll try to keep it that length as long as we can manage the printing costs, in the future."

The Ermine Violin 3 was published in February 1979 (100 copies) and contains 62 pages. The art is by Colleen Winters, Mary Mabrey, Gaylen Reiss. 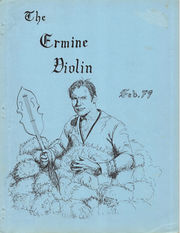 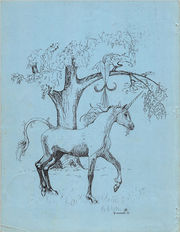 back cover of issue #3, Colleen Winters 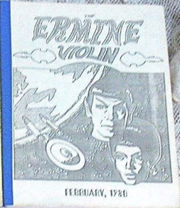 cover of issue #3, perhaps a second printing that has 102 pages?

[the preface to The Procrustean Petard responsefic]:

The following story [The Etruscan Leotard] was written in desperate response to "The Procrustean Petard," by Sondra Marshak and Myrna Culbreath printed in Star Trek: The New Voyages 2.

The authors' idea of switching the sex of the Star Trek characters intrigued me, and that is what kept me reading, in hopes that they would do interesting things with it. I was, to say the least, deeply disappointed. Despite some of the negative implications we saw in "Turnabout Intruder," I don't think Kirk would be overwhelmed with despair to find himself in a woman's body, especially if a good portion of the crew were going through the same experience. (And," in today's button-pushing society, let alone in one 200 years from now — the Star Trek century — one's success does not depend on male muscular strength.)

Being throughly irritated with "The Procrustean Petard," I set out to write a humorous parody/satire to point out the story's faults. However, my version rapidly turned into a light-hearted/seriousness which, if nothing else, is closer to the attitude I believe the Enterprise crew would take, in place of the almost-simpering primitive fear of the original story.

I also refuse to copy their use of little-known parables and quotes to make a cute point at the risk of alienating most readers. Instead, I took one of the theories rejected by those authors and turned it into a plausible reason for the existence of that strange sex-change capability. I think you'll agree with my reasoning. If not, you'll at least understand it, which is a giant step in the right direction.

I even came up with a ST-oriented explanation of how the thing works -- which also happens to take care of some of the unmentloned but deficient aspects of the original story, such as hairstyle changes. I won't, however, try to explain why everyone looks "ravishing" in their new bodies. That is a bit much.

I leave the Klingons out of this story also. Suffice it to say that when the Enterprise crew finds the solution, they'd probably offer it to the Klingons who have been changed, as well. Now, whether the Klingons would trust members of the Federation to control a machine that messes around wth Klingon's bodies is another question, and probably another story, as well.

My story ends up regaining the status quo. This is not imperative in Treklit, but, in my opinion, it is preferable to the alternative given by those authors. If the purpose of their story was to incite objectionist counter-literature, they were successful. (And why else would they have written it that way?)

If they are serious (and boy, do they write it like they were serious) about this story, I offer my version as soothing medication for other wounded Trekfen.

According to an ad in Universal Translator #4, it is a "Trekzine which also includes some B:G poetry and a Dr. Who story, 'Dr. Who and the Planet of the Crorrdi' by Gaylen Reiss, as well as a humorous article on the genesis of the Doctor (Who) by J. Holly Horsman. Art by Greg Smith, Stefanie Hawks, Colleen Winters, and others. Off-set."